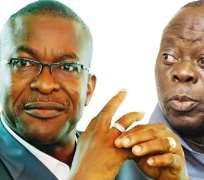 The tribunal in a ruling on Wednesday morning (local time) said the petitioner failed woefully to provide evidence to prove that the elections were marred with fraud, and that it was not conducted according to the dictates of the electoral act as amended.

The petitioner had listed 11 local government areas in the state where it alleged that there were irregularities.