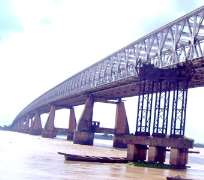 The biggest clamour in the South Eastern region of Nigeria today is call for the construction and completion of a second bridge over the River Niger connecting the South West to the South East thru the towns of Asaba and Onitsha.

This is understandable. The current bridge over the River Niger which is about 47 years old was completed and opened for traffic in 1966 and has since then borne tremendous measures of vehicular and human traffic which has continued to increase over the years.

Increasing complaints over heavy traffic on the bridge has been the key driver for the persistent calls for the construction of a second Niger Bridge.

Abraham Madu, a uniquely styled internet blogger and Pro-Jonathan Diasporan from the South East maintains that President Jonathan's completion of the Second Niger Bridge is critical to his continued support of the President. This is also understandable.

Abraham Madu has over the years, since the ascension of Dr Goodluck Jonathan to the position of President of the Federal Republic of Nigeria, been at the frontline of the clamour for a speedy completion of the second Niger Bridge and the provision of critical infrastructure across the South East. He has pursued this campaign vigorously on the internet and his voice continues to grow stronger. There are many like him.

Though based in the United States of America, Abraham Madu understands the critical role that this bridge will serve to his people in the South Eastern region of Nigeria who are predominantly traders and commute over this bridge very regularly.

President Goodluck Jonathan has been listening to voice and cries of people like Abraham Madu.

This explains why on Wednesday, August 8, 2012, the Federal Executive Council presided over by Mr President, approved the contract for Transaction Advisory services for the Design, Build, Finance and Operate (DBFO) of the Second Niger Bridge.

Stating that the Second Niger bridge is a critical national infrastructure, the Minister for Works Mike Onolememen announced that the contract had been awarded to Messrs Roughton International Limited for the sum of N325, 638,828.00 with a sixteen (16) months completion period.

Two months later, on November 14, 2012 at a meeting of President Jonathan and Governors of the five South East states where the President addressed infrastructure challenges in the South East, the Minister of Works again used the opportunity to brief the Governors on the progress of work on the second Niger Bridge.

He stated that the Transaction Adviser had already submitted an Inspection Report on the project and that a Request for Proposal had already been issued to the short-listed consortia.

He mentioned that based on projections of his ministry, there will be breakthrough on the second Niger Bridge project by the end of the first quarter of 2013; which means the successful concessionaire for the project will be on site.

Not many understand why President Goodluck Ebele Azikiwe Jonathan has been approaching the construction of the second bridge over the Niger with so much procedural tact, diligence and firmness.

The story of a second bridge over the River Niger has been a long one.

On May 24, 2007, with just about five days to the end of his tenure, then President Olusegun Obasanjo flagged-off the contruction of the N58.6 billion second River Niger Bridge to link the West and the East in Onitsha.

The contract which was to be have been awarded under a Build, Operate and Transfer (BOT) arrangement, was to involve the governments of Delta and Anambra states. They were to partner with the Federal Government and Gitto Construction Group to finance the project with Diamond Bank as managing financiers.

Gitto Construction was to provide 60 per cent of the funds, Federal Government 20 per cent and 10 per cent each was to be provided by the governments of Delta and Anambra states.

Not too long after President Obasanjo left office, the Anambra state government led by Governor Peter Obi declared that there was no such contract in place for the construction of the bridge.

On January 29, 2010, three years after the project was flagged off, Hassan Muhammed Lawal, Minister for Works, Housing and Urban Development confirmed that no contract was awarded for the construction of the second Niger Bridge.

The Minister, in a response to journalists, stated that besides the flag-off ceremony, there was no contractual agreement between the Federal Government and any contractor for the project and that even though the government was considering the construction of a second Niger Bridge, nothing had been done and that he had not come across any document showing that such a contract existed.

During a campaign in the South East, President Goodluck Ebele Jonathan promised that he will build the second Niger bridge.

He is keeping that promise.