Who are the Sunnis and the Shiites? 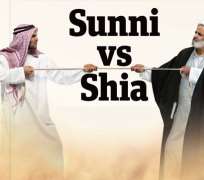 In 622 AD, Mohammed founded the first Islamic State in Medina, a city in Saudi Arabia, north of Mecca. There are two branches of the religion he founded. Sunnis and Shiites. In the Christian world, it is similar to Catholics and Protestants. About 70-90 percent of Muslims are Sunnis, while about 10-20 percent are Shiites.

Sunni is an Arabic word for followers-followers of Mohammed. Shiite came from Shiat-Ali “partisans of Ali”, after the Prophet's cousin and son in law whom they favored to be Caliph. In time, they became known as Shiite.

Though they have differences, they also have commonalities. Both believe in the five pillars of Islam-daily prayers, fasting during Ramadan, alms giving, pilgrimage to Mecca, and belief in one unitary god. Both also believe in the Koran, praying in the direction of Mecca and observing the same dietary and general social restrictions.

They also have differences. The Sunnis recognize the first four Caliphs as Mohammed's successors. They recognize the heirs of the four Caliphs as legitimate religious leaders. These heirs have ruled continuously in the Arab world until the breakup of the Ottoman empire at the end of World War one. Kemal Ataturk, founder of modern Turkey abolished the Caliphate in 1924. In contrast, the Shiites believe that only the heirs of the 4th Caliph, Ali, are legitimate successors of Mohammed. Another difference concerns the Mahdi “the rightly guided one”, whose role is to bring a just global Caliphate into being. For the Shiites, the Mahdi has already been here and will return from hiding. Sunnis believe that the Mahdi is yet to emerge into history. Another difference is that the Shiites have a hierarchical structure of leadership like the Grand Ayatollahs, Ayatollahs, Hojatolislams, Mullahs, etc. The Sunnis don't have such a leadership structure.

The Shiites are dominant in Iraq, Iran, Bahrain, Lebanon and Azerbaijan. They form the second largest sect in Pakistan. This area is known as the Shia Crescent. There are few Shiites in Nigeria, and they are concentrated in the town of Sokoto. However the Sunnis are dominant in the rest of the Islamic countries like Indonesia, Egypt, Turkey, Syria, Pakistan, Bangladesh, Saudi Arabia, Kuwait, Pakistan, Afghanistan, Jordan, Niger, Algeria, Morocco, United Arab Emirates, Qatar, Malaysia, the Comoros, Libya, Tunisia, Mali, Burkina Faso etc. Majority of the Muslims in Nigeria, China and India are Sunnis. It is important to note that India has more Muslims than the entire Arab world put together. There are about 177 million Muslims in India. Also with the exception of Egypt, Nigeria has more Muslims than any Arab country. There are about 70 million Muslims in Nigeria.

A lot of the conflicts in the Middle East are fueled by the Sunni-Shiite conflict. The rebellion in Bahrain was led by the majority Shiites against a minority Sunni led govt. With the support of the United States, Saudi Arabia sent in troops to help the minority Sunni led government put down the insurrection. It is not in the interest of the United States for a Shiite government to take power in Bahrain, because of the influence Iran will exert.

The opposite is the case in Syria. The current rebellion in Syria is led by the majority Sunni population(90%) against a minority Alawite led government. The Alawites are an offshoot of Shiism. Iran which is a Shiite state, is a strong supporter of the Assad regime because of this religious connection. The United States and Saudi Arabia are supporting the Syrian opposition because of Iran's connection to the Assad regime.

The Sunni Shiite divide also played a significant role in the Iran-Iraq war. With the exception of Syria-which has a Sunni majority but an Alawite minority government-all the majority Sunni countries supported Iraq, primarily because of the fear of Shiite expansion. Moreover, in Sunni dominated countries, the Iranian revolution was not seen as an Islamic revolution, but as a Shiite revolution, and therefore not welcome. Pakistan is currently experiencing a conflict between the sects.

A lot of the Islamic terrorist groups also follow the divide. The Muslim Brotherhood is a Sunni organization, so also is Osama Bin Laden's Al Qaeda, as well as Hamas in Gaza and the Taliban in Afghanistan. The Hezbollah and Amal in Lebanon are Shiite dominated organizations.


*Dr. Leonard Madu is President of the African Caribbean Institute and African Chamber of Commerce. He is also a Fox TV foreign affairs analyst and writes from Nashville, TN.

Disclaimer: "The views/contents expressed in this article are the sole responsibility of Leonard Madu and do not necessarily reflect those of The Nigerian Voice. The Nigerian Voice will not be responsible or liable for any inaccurate or incorrect statements contained in this article."
Articles by Leonard Madu
15-7-2013  Nigerian Army Got It Wrong With Hezbollah25-2-2013  Obama's Luo People19-2-2013  Who Are The Sunnis And The Shiites?.20-1-2013  In Africa, Islam And Christianity Coexist Harmoniously18-1-2013  The Muslim Brotherhood:face Of Political IslamMore...