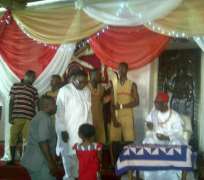 Lagos, Nigeria; January 16, 2013: Airtel's Nigeria's Got Talent Season One winner, Miss Amarachi Uyanne, has received an Award for Excellence from the Oba of Benin, for her sterling performance in the just concluded reality TV talent hunt show.

Eight-year-old Amarachi was among ten outstanding persons honoured by His Royal Highness, Omo No'ba N'edo Uku Akpolokpolo Erediauwa, at the annual event that recognizes achievers within the Oba's domain.

The young violinist and dancer stunned Nigerians when she outclassed 50 other contestants to emerge the winner of the maiden edition of the Got Talent competition that was sponsored by Airtel Nigeria.

The honour from the Oba of Benin comes weeks after the show sponsor; Airtel Nigeria treated the youngster to a grand reception preceded by a media tour of select media houses in Lagos.

The highly revered Monarch who personally presided over the Awards Presentation ceremony in his Palace in Benin City said the recognition was to encourage excellence among the subjects of the kingdom in their various fields.

Speaking on the development, Airtel Nigeria's Chief Marketing Officer, Olu Akanmu said the honour was well deserved by the youngster and praised the Oba for recognizing the young talent, adding that such gesture could spur Amarachi to the world stage in the nearest future.

His words: “Amarachi's success story is a fair picture of our vision and plan for Nigerians especially the youth. We are glad for her achievements at this early stage of her life and our solemn pledge to continue to provide more platforms such as the NGT alongside our primary obligation to create best-in-class telecommunication experience remains firm.”

Other recipients of the Oba's honours during the grand ceremony at the Royal Palace were the Vice Chancellor of the University of Benin (UNIBEN), Professor Osayuki Godwin Oshodin for Academic Excellence and Professor Osato Frank Giwa-Osagie of the College of Medicine, University of Lagos for his outstanding performance in the health sector, especially in obstetrics and gynaecology.

The monarch honoured the duo of Sir David Osunde and Pa Joseph Alufa Igbinovia for the Idia Mask sculpture which was a master piece at FESTAC 1977.