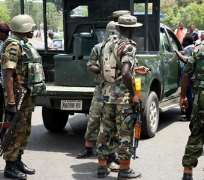 Spokesman of JTF in Borno State Lieutenant Sagir Musa said today in an e-mail statement made available  to reporters in Maiduguri.

Musa said Monammed Zangina had  Coordinated “most of the suicide attacks and bombings in Abuja, Kaduna, Kano, Jos and Potiskum. Zangina is a key member of the Shura Committee of the Boko Haram Terrorists, he is also among those declared wanted and a bounty of 25 million Naira was placed on him by the JTF “

JTF said  Zangina “often referred to as Alhaji Musa is the leader of North Central part of Nigeria and  was in Maiduguri to plan several deadly attacks  against civilians and security personnel. “

The captured Zangina was said to have survived several security manhunts on” his hideouts in Abuja, Kaduna, Kano, Jos and Potiskum. His arrest was effected by JTF troops following a special operation conducted in GRA, Maiduguri. He is undergoing interrogation.”