THERE WILL BE GRAVE CONSEQUENCES IF JONATHAN RUNS IN 2015 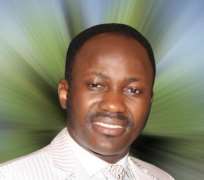 Apostle Johnson Suleman is the General Overseer of Omega Fire Ministry, one of the leading new generation churches in the country today. The church located along the Auchi-Abuja road in Auchi, Edo state is another Mecca in Nigeria as people from all over the world throng the giant edifice to see him. As a result, it was not easy for Saturday Vanguard to track down the man of God for this interview due to his very busy schedule.

However, with sincere apologies, Apostle Suleman finally spoke to Saturday Vanguard at the Benin Airport, and as expected, he gave his 2013 predictions, saying that it will be disastrous for the nation if President Goodluck Jonathan decides to run for the 2015 Presidential election. Pastor Suleman who had in the past predicted the death of President Yar'Adua, disclosed that only eight governors will finish their tenure unless urgent prayers are made to save the situation. He spoke on his life and his views on the seeming trend by top Pastors in the country purchasing private jets. Excerpts:

I started remembering dreams I had of heaven and hell and of God calling me to become a preacher. Prior to that time, two years before that encounter, I was already a Christian in 1990 but I was scared to be a Pastor because of the so much stigma associated with Pastoring at that time. So for the call , I did not see December 25 1992 and that was the encounter that I had of God giving me a warning that I had no other choice than to do his work. That was the major encounter I had that made me become what I am today.

Life as a cultist in school
It was a normal one though I was doing some secret evil that my parents did not know. My father was surprised when he heard that I started smoking when I was in primary school. My parents were strict. My mum is a retired police officer while my Dad is a retired politician. They were very strict. But I found out that sometimes when you are too strict on children, they device means to break laws. That was what happened in my case. It was just the normal juvenile delinquency of the Nigeria youth.

I was not living a good life before I became born again. I was a cultist in the higher institution. I was actually leading a sect in school then. The only thing I never did was to kill or rob. I am saying this publicly so that people who are cultists will know that there is nothing there. I did every other thing that a young man will do but I never partied. I was always a shy person, and that is why I am even surprise that I am a Pastor today because I am always shy in the crowd.

I have never gone to any party in my life. I love doing my things quietly and forget it. I started my higher education at the Auchi Polytechnic and did my PHD in UNIBEN. I actually studied Mass Communication in Auchi. When I was in school, I was academically sound despite my bad boy attitude. I had a lot of women around me because they know I was very intelligent in school. I was SUG President, then class Rep.I have always excelled in my academics because that was one thing my parents were able to imbibe in me.

Finding a wife
My wife was my enemy. She was some body I never liked, she was too quiet but I felt she was a pretender. To make matters worst, she was my neighbour in our street. She was so quiet and reserved and I did not like that. I felt she couldn't be that pretty and say she didn't have relationships with men. I never liked her honestly. But some how, one thing led to another and today we are married with four kids.

Secret behind the success of my Ministry I measure success with how many lives I have affected. I will say I am successful when I have affected the last person on earth. Presently, we have been able to move on and carry on just by the grace of God. God gave me the right team. I have loyal pastors who are educated.All my senior Pastors are graduates and it has helped us to bring their secular knowledge to play.

It has been wonderful and we thank God. Why all my predictions have come true Well, I know I always wait upon the Lord, like every year I go on 40 days fast three times. I spend at least five hours every day studying and praying. But all of that is not what really brings the anointing. The gift of God is embedded in you by the anointing. When the anointing of God comes upon you, the gift of God is embedded in you and it is this gift of God that propels you to see things and say them. Like I said, all my predictions have come to pass. I predicted the death of President Yar'Adua.

When I predicted that, some top Pastors in the Ministry said I was lying. I learnt some of them went there to pray for him and when God gave me the date of his death, my life was threatened, people came after me. But finally it came to pass. You see, when revelations of God come, what people should do is to find out how to redeem themselves when it is negative and when it is positive, you thank God for that. We live in a generation people just get political when prophecies come. Some people get upset and start chasing the man of God. This is God speaking through a man and we should understand that there is nothing personal about that.

But people have this perception that some of you top Pastors belong to one cult or the other where you get your powers. What is your take on that?

Talking about being materialistic, we have observed Pastors buying private jets and building schools; they are really wealthy in the society but their members are dying in poverty?

The truth is that some of these Pastors in fairness have really done a lot for the less privileged. We can never do enough but you can do a lot because there is still one less privileged person out there that needs to be reached. It is not possible for the soap factory to make sure that every body gets neat every day, but what they can do is to affect the ones they can affect and enlighten the ones they can enlighten. Most Pastors also have really taken it up as a challenge to touch the lives of the less privileged.

But some of them have not. When a Pastor has spent many years in the Ministry and now owns an air craft, I have no problem with all of that. What I have a problem with is this pursuit to prove to the world that you have arrived. You are going to pay the pilot, the crew members, maintain the aircraft, it cost a lot of money. That is my worry with people in that category.

Advice for President Jonathan One major thing that I will say now is that people should be careful not to be crazy about power. One good thing that I will advise President Jonathan is that he should not contest for the 2015 presidential election. And if prayers are not made, if we don't pray, I see only eight governors completing their tenure. We should pray because with prayers, a lot of things can be averted but if we don't pray, we will see eight governors only completing their tenure. What God wants to focus on this year is to reward politicians with their sins.

The Agricultural sector is going to receive a great boost this year. We have natural disasters coming up. I have a revelation last November that there will be attempt on the life of President Obama. I saw an African President being laid to rest and I saw Nigerian flag flying half mast. We need to pray for President Jonathan, if he goes ahead to contest there will be trouble. Abacha's wife left the villa without Abacha, Yar'Adua's wife left the villa without the husband, if Jonathan goes to contest, some thing very grave may happen.

Those who are pushing him now, they want to destroy him. I am not saying this out of any personal animosity. I am saying this now because it can be averted.

He should seek counsel. I love him but destiny has to be taken very sacrosanct. So I believe that if he asks for counsel, people can help him not to run for the Presidency in 2015.