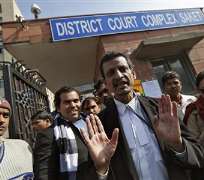 One of five men charged with the gang rape and murder of an Indian student said police tortured him in custody and he and at least three of his co-defendants say they are innocent, lawyers said on Thursday.

The five accused arrived in court for a closed hearing with their faces covered by scarves, and accompanied for the first time by defense lawyers.

The 23-year-old physiotherapy student died on December 29, two weeks after being raped on a moving bus in New Delhi, then thrown bleeding onto the street along with a male friend who was also beaten. Nationwide protests followed against a perceived failure by authorities to stop violence against women.

One of the accused, Mukesh Singh, the brother of a bus driver who police say was the leader of the gang, will base his defense on police brutality, his lawyer said.

"Mukesh was illegally tortured in the custody of the police," said the lawyer, Manohar Lal Sharma.

Sharma said police had sexually assaulted his client with a stick and humiliated him. "They urinated in his mouth, they did all kinds of things to him. He is facing the same torture now from the jail inmates," he said.

A spokesman for New Delhi police was not available for comment.

The five face various charges including murder, gang rape and abduction and prosecutors have said they will seek the death penalty. A sixth suspect is being investigated separately to determine if he is below the age of 18, as he says he is.

The case has shone a light on a widespread problem of violence against women but also the failure of the criminal justice system to bring the guilty to justice in a country where official statistics show a rape is reported every 20 minutes.

The men were arrested in the days following the December 16 attack when the bus was identified by footage on security cameras, leading police to the driver and alleged gang leader Ram Singh.

Singh, who lived in a New Delhi slum, told his lawyer, V.K. Anand, that he was innocent during a two-hour meeting in Delhi's Tihar jail, the lawyer said.

"I will ... prove their innocence," the lawyer said after the hearing.

The fifth man has yet to be assigned a lawyer and it is not known what he has told court or how he intends to plea.

Charges against the sixth member of the group have not been brought while police complete an inquiry to confirm his age. If he is found to be below 18 he will be tried in a juvenile court and if convicted will go to a correctional home, not a prison.

GROUNDS FOR APPEAL?
For days after their arrest, none of the men had a lawyer. Most members of the judiciary refused to represent them because of the outrage over the attack.

Police conducted extensive interrogations of the men in the absence of any lawyer and they say they have recorded confessions.

The hearings, which are closed to the media, are taking place in a court across the street from a cinema where the victim watched a movie before boarding the bus with a friend who was also severely beaten.

Prosecutors say they have a large file of evidence, including statements and DNA from blood-stained clothing recovered by police.

But legal experts had said the earlier lack of representation for the five suspects could give grounds for appeal if they were found guilty. Convictions in similar cases have often been overturned years later.

The trial will be conducted in a special fast-track process, set up after the attack, but some legal experts have warned that previous attempts to fast-track justice in India had, in some cases, led to imperfect convictions that were later challenged.

The government is also seeking to change the minimum age teenagers can be tried as adults, in the face of public anger the youngest accused might serve a maximum term of three years.

Namita Aggarwal, the presiding magistrate, said on Monday that the trial would be held behind closed doors because of the sensitivity of the case.

The woman died in a Singapore hospital where she had been taken for treatment. She was identified by a British newspaper on the weekend but Reuters has opted not to name her.

Indian law generally prohibits the identification of victims of sex crimes to protect their privacy in a country where the social stigma associated with rape can be devastating.