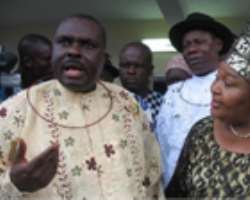 Former Delta State Governor, James Ibori has unwittingly found himself in the middle of efforts by an international coalition to arrest and bring him to justice for orchestrating one of the most brazen and monumental cases of embezzlement and theft of public funds by any Nigerian State Chief Executive.


Amid the persistent feet-dragging by the Yar'adua administration which has continued to shield Ibori from the long arms of the law, and in what seems like an intent to insult and mock the collective sensibilities of law-abiding citizens the world over, the coalition involving anti-graft campaigners in Britain and the United States has resolved to arrest Ibori and transfer him to any jurisdiction across the western hemisphere, most likely, Britain, where he will be tried for corruption and money laundering.


Huhuonline.com has learnt from sources in the coalition that special operations units are now combing the streets of Nigerian cities with instructions to kidnap Ibori and transfer him to Britain or the United States. The dragnet, sources told Huhuonline.com has also been widen to China; the only country where Ibori now travels since any attempt to step foot in the western hemisphere spells doom for the former governor, who, of late has launched a massive media campaign to rehabilitate his hugely tarnished image; taking Nuhu Ribadu head-on in a bruising tit-for-tat media spat.


The uncharacteristic enterprise dubbed; “Operation Umaru Dikko,” after the audacious attempt by Israeli agents to kidnap and smuggle Umaru Dikko; former Nigerian Transport Minister out of London, is said to be masterminded by some past and present barons of the ruling PDP who feel relegated to the background after losing out in the power struggle that heralded Yar'adua's ascent to the Presidency.


Huhuonline.com understands that James Ibori has become the most powerful and influential men in Nigeria today, having generously oiled the wheels of Yar'adua's 2007 presidential campaign machinery. “Ibori is the kingmaker; all the noise about the so-called Kaduna and Katsina mafia is now history…Ibori is the boss,” a presidential source told Huhuonline.com, adding: “his tentacles stretch from the corridors of Aso Rock to the creeks in the Niger Delta. He is Yar'adua's political Godfather and no Nigerian government official dare cross his path. The man is an untouchable.”


Sources have told Huhuonline.com that as soon as Yar'adua came into office, James Ibori put pressure on the President to remove Ribadu as EFCC boss. Ibori's strategy was to buy time from prosecution by orchestrating the removal of Ribadu. The story was that Ribadu had messed up and lost respect among Nigerians for allowing former President Obasanjo to use him for political battles. If Yar'adua had to be taken seriously about fighting corruption, then Ribadu would have to go, Ibori reportedly told the President. Ibori had his way and Ribadu was not only fired and humiliated, but is now on self-imposed exile.


Many believe Ibori has an ally in Michael Aondoakaa, the Attorney-General and Minister of Justice. Aondoakaa's attitude towards the fight against corruption is, perhaps, better understood against the background of his battle with the EFCC as one of the Counsel to the Benue State government in its action against the EFCC. The state government asked the court to declare the EFCC illegal body and that it had no right to investigate corruption cases against any Benue state official. That case was decided in favour of the EFCC.


To secure a second term, President Yar'adua must persuade state governors to stick together and back the ruling PDP again. That may be harder in 2011 than it was in the last two elections and it thus will amount to political suicide for Yar'adua to turn against Ibori in the countdown to 2011.


Huhuonline.com has learnt from impeccable presidential sources that the international anti-graft coalition has been mounting pressure on Yar'adua to make good his rule of law mantra by ending his protection of Ibori. Another important test of Yar'adua's reform commitment loom: his willingness to sack the widely reviled AG Michael Aondoakaa in the coming reshuffle. That would remove one of James Ibori's greatest cheerleaders in the government. Last month, three of Ibori's female associates faced trial in London for laundering of funds stolen from the Delta State treasury. The outcome of this case will shape the future of Yar'adua's presidency.


The accusations against Ibori are, indeed, grave and it would be a waste of time to catalogue the many crimes of James Ibori; rather it would be comforting to note that the noose is tightening around his neck as pressure continues to mount on Yar'adua to bring the former Delta State Governor to justice. Ibori is facing 103 counts of money laundering and corruption but the case is unlikely to ever go to trial let alone be resolved. Similar charges against him in the England brought by the London Metropolitan Police were dismissed after the Nigerian Attorney General; Michael Aondoakaa filed a petition that they be dropped.


James Ibori wields enormous influence and epitomizes everything that is wrong with the Nigerian character. James Ibori is no doubt fighting the battle of his life. Depending on how his luck holds, the next few months will determine whether he will remain the main power broker in the Yar'adua government as his enemies and detractors close up on him. Ibori is having sleepless nights, not only with the ongoing fight with Nuhu Ribadu, but he can no longer step foot outside the shores of Nigeria(Europe & America). But beyond all this, Ibori continues to play a game of survival by using his understanding of Nigeria's political system to escape the law. Will he survive, will he sink? This is the question agitating the minds of political observers in and outside the corridors of power.

"For a better society Read and Forward"