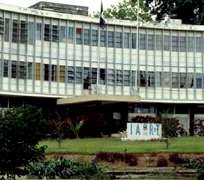 SAN FRANCISCO, January 08, (THEWILL) - The academic and non-academic staff of the Institute of Agricultural Research and Training (IAR&T), Moor Plantation, Ibadan, Oyo State, have called for the sack of the Director and chief executive of the Institute, Prof. Adefemi Ogunbodede.

Acting under the aegis of Academic Staff Union of Universities (ASUU), Senior Staff, and the Junior Non Academic Staff, the workers, who staged a peaceful protest to drive home their call, accused Ogunbodede of corruption and favouritism.

They also alleged that the Ogunbodede-led management misappropriated a whooping N177.5 million meant for the payment of 17 months hazard, transfer and other allowances of the workers.

The protesting workers are also kicking against alleged disbursement of funds without due process and reference to the audit department and alleged running of the Institute like a fiefdom by the director.

Also, they accused the Director of recruiting his kinsmen and acquaintances at the expense of more qualified applicants.

Singing abusive songs denigrating the Director during the protest, they displayed placards, some of which read: “Ogunbodede must go”; “All we are saying is give us our rights”; “ Save IAR&T from collapse”; “Minister of Agric, OAU VC, please intervene and save IAR&T”.

Chairman of the Institute's chapter of ASUU, Dr. Olunfunmilayo Ande, who addressed journalists on the crisis, deplored what she described as the apparent vacillation of the authorities of the Institute on the reports of the three panels set up to investigate the allegations against the director by the university, Agriculture Ministry and the Ministry of Finance.

She maintained that the workers' joint action became necessary to save the Institute from collapse, adding that there had been no meaningful research done in the Institute since the inception of Ogunbodede’s administration.

On his part, the NASU chairman, Mr. Femi Oladeinde, said the workers had lost confidence in Ogunbodede and asked government to sack him.

When contacted for his reaction to the allegations , Ogunbodede declined to comment on the issue, referring the anxious journalists to the vice chancellor of Obafemi Awolowo University (OAU), Ile- Ife,Professor Tale Omole, whom he said was the only person competent to speak on the matter.

He maintained that as a public servant, he was not obliged to speak to the press unless with the permission of the supervising vice chancellor.

IAR&T is a research organ of the Federal Government with OAU, Ile Ife, the Ministry of Agriculture and Agricultural Research Council as supervisory agencies.

When contacted on the issue, the OAU vice chancellor, Omole, however, confirmed that he had received a petition on the allegations, which, he said, were being investigated.

Omole explained that the white paper on the outcome of the probe was not out yet, because the panels probing the matter were yet to conclude their work.

According to him, the one set up by the university, for instance, asked for extension of time.

He however advised the workers to be patient, saying "the matter is complicated because the panels were set up by three independent bodies and we have to look at everything before a decision could be made."

He nonetheless assured that if Ogunbodede is eventually found guilty, the law will surely take its course.

"My administration will not condone any fraudulent act that can damage the reputation of the university,” he assured.