THE PLACE OF IFA STUDIES IN OSUN STATE 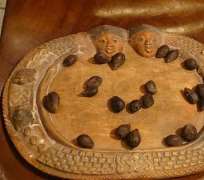 Since the announcement made by the Osun State Governor, Ogbeni Raufu Aregbesola, few days ago that a comprehensive plan was on the way for the state’s secondary school students to study Ifa as one of their subjects, not many in and around the state were impressed with and disposed to such idea.

Aregbesola made the idea known during the special prayers session to usher in the New Year, organized with clerics from all religions. He disclosed that his government had returned religious studies to all public primary and secondary schools in the state, adding that the free computer tablet tagged ‘opon Imon’, which the government would present to secondary school students had an application for Ifa studies.

Despite the Aregbesola administration not appealing to quite a few, it behoves one to say that this is one policy whose coming is timely and highly needed at a time when religious consciousness of others should be examined to better appreciate who we are as a people, especially when the issue of religious tolerance, unity, love and peaceful co-existence, which Ifa divinity enjoins, eludes us in this country.

For many who have started castigating the state government for such a laudable initiative, this writer make bold to state that they are quite ignorant of the Ifa world view and therefore, should begin the process of finding out what Ifa worship or Ifa divinity has always been and what it is today before condemning outright what ordinarily needed to have been embraced before now. For the single fact that many of the people who claim to be Africans today or coming back home now, Nigerians, were once followers of African Traditional Religion, which Ifa worship belongs, should not look in disgust or awe at a period in history when religion brought all together under one bloc.

As a result of misconceptions which may arise due to the introduction of Ifa studies in Osun state public schools, this writer (though not initiated or well versed in traditional Yoruba religion (Ifa) or any religion that is based upon Ifa such as Lucumi, Candomble and Santeria) will enrich readers with what Ifa and Ifa worship denotes.

Ifa refers to the system of divination and the verses of the literary corpus known as the Odu Ifa. The Yoruba believe in divination and therefore, believe that Ifa is the source of all knowledge and that the Orisa Orunmila is the keeper of this knowledge. It is through divination that man is told what must be done to change things that are negative to things that are positive. On the other hand, according to a blog, Ile Emi Ifa, 'Ifa worship is not intended to be about the worship of Orisas, ancestors, communities, or priests, rather, Ifa followers may venerate and perform rituals to show appreciation to the spiritual entities that comprise their belief system and in all honesty the worship of Orisa and veneration of ancestors is incidental. The blog went further to state that 'The primary point of the belief system of Ifa is the development of strong, responsible, spiritual character and Ifa doesn’t even require people to believe in Ifa, Orisas, or ancestors for their so-called spiritual salvation.'

In Ifa is found the vision of the world, the destiny of mankind, the social relations, the morals of life, from birth to death. Through the system of Ifa of the Yoruba, one can find the knowledge of the community. Ifa is deep rooted in and among the cosmology of the evolution of the Yoruba. The Yoruba since its evolution had developed a form of religion which today has become one of the world's most influential religions, claiming no less than one hundred million believers worldwide. Millions who engage in Ifa worship or its study could be found most especially in Nigeria, the Republic of Benin, and Togo in West Africa as well as Brazil, Colombia, Cuba, Puerto Rico, the Guyanas, Jamaica, Grenada, Trinidad and Tobago, St.Kitts, and St.Vincent in the New World.

According to Professor Ade Dopamu, he is of the opinion that Santeria and Candomblé are part of the Cuban and Brazilian manifestations of Yoruba religion. He also noted that out there, the beliefs and organizational structure of the Yoruba religious system remain generally intact, even though they may incorporate other African roots and a veneer of Catholicism.

For the fact that Yoruba religion and its various strands of worship play a very critical role in many parts of Nigeria and disapora, it is therefore, the reason knowledge of Ifa studies should be encouraged and introduced not merely for the purpose of initiating students into some 'occultic realm' which critics are wont to make us believe, but for the sake of knowledge sharing and in the spirit of knowing ourselves better in our everyday conversation and interaction.

If Jacob K. Olupona, a noted scholar of indigenous African religions, whose earlier research ranged across African spirituality and ritual practices, spirit possession, Pentecostalism, Yoruba festivals, animal symbolism, icons, phenomenology, and religious pluralism in Africa and the Americas, had taken giant strides in impacting the Yoruba and African traditional cosmology to American and international audience, or High Chief Ifayemi Elebuibon, who is the founder of Ancient Philosophy International, a Cultural Adviser to the National Black Theater in Harlem, New York and spiritual adviser to the San Franscisco based WAJUMBE Cultural Institution and who also doubles as an international scholar in residence at San Francisco State University, where he lectures on African Traditional Religion and Culture, then we also must take that step forward in grooming our children on the need to have a grasp and appreciate the rich socio-cultural heritage we possess in abundance.

If we must begin to get it right through religion where everybody's faith is respected in Nigeria, then we should learn from the Chinese who have never toyed with Confucianism as a way of life and perhaps best understood as an all-encompassing humanism that neither denies nor slights Heaven. Followed by the Chinese for more than two millennia, Confusianism has deeply influenced spiritual and political life in the country.

Since Osun state is one of the few whose people are tolerant of one another, the introduction of Ifa studies couldn't have come at a better time to further depeen this hand of tolerance. The initiative should also be pushed towards the tertiary institutions and made one of the key courses offered at all levels. The benefit of learning and understanding the Ifa world view cannot be overemphasized as it will train students socio-culturally, engage them in asking critical questions past generations refused to ask, keep them abreast of their historical past and most importantly imbibe in them the spirit of unity in diversity.

Osun state prides itself as a culturally vibrant entity and houses the embodiment of the Yoruba race. If nobody guards these abundant natural yet unique heritage through the knowledge passed by our forefathers, posterity will never forgive us.