Why Critics Of Gov. T.A Orji Are Getting It Wrong 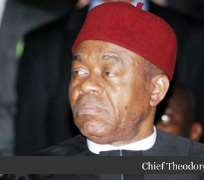 I have the initial burden of either writing this piece to correct an impression by a minute section of the press and few critics of Abia state governor, Sir Theodore Ahamefule Orji that tend to stand truth on its head and present falsehood as fact or allowing the mumble jumble they come to town with in the name of criticizing the Abia chief executive to be their albatross since fact is always sacred. But some thing inside of me insisted that I must make these clarifications, having been closer to the system (since 1998) which these commentators are commenting on. Secondly, it will be unexplainable for anybody closer to the government of Abia state to maintain the studied silence when the opposite of splendid the political and social development playing out in Abia state is being forced on the unwary public.

Indeed, I appreciate the sentiments of a section of the media, and also their predicament. But what I can’t understand is the deliberate or will I say orchestrated plan to present one sided documentary of the development in Abia vis-a-vis the relationship between the two Orjis ie His Excellency, Chief T A Orji and former Governor Orji Uzor Kalu.

In as much as I agree that journalists should express their opinions strongly on certain issues concerning the state of affairs in the society, I also believe in the notion that objectivity is a significant principle of journalistic professionalism.

One can easily miss the point if he or she maintains a robust interest on a particular issue only to keep a blind eye on the other side of the coin. Me thinks that journalistic objectivity can refer to fairness, disinterestedness, factuality and nonpartisanship. This is why it is appropriate to present the fact as it is no matter how strong one’s opinion on a particular issue is. I regret to state that some of the commentators (by a section of the media though) on Abia Project is based on circumstantial evidence or hearsay and not on facts on the ground. If they could distance themselves from the evidence of a third party and come to Abia state to witness the actual happenings, their public perception of the events in Abia would be anything but prejudice; thus offering the reading public the best of their analyses on Project Abia.

Indeed, a trip to Abia will change the perception of some Lagos and Abuja based journalists who still mirror this God’s Own State from its position before 2007. It is worrisome to read that there are decaying infrastructure ie road, electricity, pipe-borne water etc in Abia when in actual fact the T A Orji’s government alone has provided more roads than all his predecessors (from 1991 when the state was created till date) put together. As at the last count, the 132KV at Ohiya substation that supplies electricity uninterruptedly to Umuahia, while the government had put up the machinery to provide pipe-borne water to the cities.

Today, every sector is being galvanized to achieve optimum result. Is it in health sector, education, agriculture, commerce and industry, housing, security etc that the government of Abia state is not prioritizing? Time was when some people in the state particularly Aba fled the city because of the rampage of kidnappers. It took the intervention of T.A Orji with the support of the federal government and military to restore normalcy to the once dreaded city. Now that normalcy has been restored, international firms like Alkamali petroleum of Dubai, Junohermes, a South African firm, Imoniyame Holdings Ltd, Americare Inc USA are coming to do business in oil and gas, agriculture, banking and commerce etc. Today, farmers are smiling their ways to the banks courtesy of the N1 billion soft loans the government provided for them.

A trip to Abia will expose a lot.
Housing estates dot the landscape. They include Amaokwe, Ehimiri, Ohiya, Ubakala, Amuzukwu, Isieke, Osisioma, etc; most of them have been completed and being occupied, while others are at various stages of completion. Or do we talk about the establishment of modern diagnostic health centres ie specialist diagnostic hospitals in Aba and Umuahia. The high courts and magistrate courts building projects in Aba and Umuahia Just last month, Governor T A Orji flagged off 16 roads in Aba to the delight of Aba residents. And on Tuesday, 4December 2012, he went on an inspection tour on these road projects to the tumultuous welcome of Aba residents. It baffles some of us when some commentators insinuate that His Excellency is hated by Aba residents.

Which Aba residents? His critics also charge that civil servants are owed monthly arrears of salaries and allowances, yet none of these critics could point out the ministry that has not received their salaries up to November 2012. To this end, he has received several awards as a result of his quality leadership. This year alone Ochendo has been bestowed with the best Governorship Award on Security, Icon of Democracy by Champion Newspapers and Knight of John Wesley by the Methodist Church of Nigeria.

If there is a challenge in the payment of pension and gratuities of civil service, it is not as a result of government dereliction but apparently because of some bureaucratic bottlenecks. The government is addressing that issue and very soon senior citizens affected by this tailback will smile. Therefore, it is absurd to insinuate that Abia is not on the fast track of development. Actually, federal roads are in the state of disrepair. EnuguÃ¢â‚¬'Port Harcourt road, Aba-Ikot Ekpene, Umuahia-Ikot Ekpene etc are impassable. But critics blame Abia government for their despicable state.

They fail to acknowledge the fact that the T.A OrjiÃ¢â‚¬â„¢s government reconstructed the Aba-Owerri road and Aba-Port Harcourt road; all federal roads. We expect commentators on Abia to question why the federal government should shirk its responsibility in this regard in Abia state.

As a detribalized are focused leader, T A Orji sees everything that belongs to the federal government as his to keep in good shape. Arguably, a politician that is focused towards providing good governance like T A cannot descend to the level of blocking former Governor Orji Uzor Kalu from rejoining the PDP. Kalu has repeatedly said that he has no intention of joining PDP or any political party for that matter.

However, instead of abiding by that vow he was reported to have applied to register at the national level against the constitution of PDP that stipulates that intending members or those that left the party and desire to rejoin should either join or rejoin from their ward.

Even at that, and assuming that he applied to register at his Onuibina-Igbere ward level, he is still cannot be regarded as a member of the party if the party at the ward level thinks otherwise. It is one thing to apply for membership of an organization and it is another for the members to accept the applicant as a member. There are determining factors. It is not automatic. Therefore, if the rules were bent to favour a particular applicant, there is nothing wrong if some stakeholders stage a protest. That is how Governor T.A Orji was involved. It is unacceptable to accuse the Governor of leading the stakeholders to Abuja to complain of the glaring case of violation of the PDP constitution while turning blind eye on the genuineness of the exercise. After all, what is good for the goose is also good for the gander.

Former Governor Orji Uzor Kalu should not be treated differently simply because he allegedly donated $1 million to facilitate the take off and smooth running of PDP in 1998Ã¢â‚¬. The theory of Kalu donating $1 million to the PDP has become a recurring decimal without any empirical evidence to back the claim. The figure keeps changing as his supporters defend him over it.

As for politicians who joined PDP from their former political parties. In as much as I wouldn’t speak for the likes of Senator Enyinnaya Abaribe, who left the PDP to ANPP and back to PDP in 2003, Senator Nkechi Nwogu from ANPP to PDP and Vincent Ogbulafor who contested the governorship of Abia state under the then APP in 1999 before joining PDP in 2002, it is obvious that these politicians complied with the provision of the PDP constitution before they were re-admitted.

They did not bulldoze their ways into the party. The party is supreme and therefore all joiners should be obedient to its rules.

What should concern every card-carrying party member in PDP or any other party for that matter is the insistence of the practice of internal democracy by its leaders. In underscoring the essence of internal party democracy, Lenin wrote “it means that all the affairs of the party are conducted, either directly or through representatives, by all members of the party, all of whom without exception have equal rights; moreover, all officials, all leading bodies, and all institutions of the party are subject to election, are responsible to their constituents, and are subject to recallÃ¢â‚¬. This postulation makes it mandatory for all; members or applicants to subject themselves to the rule of the party irrespective of their former or present status.