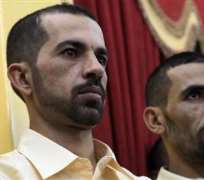 A plane carrying the pair landed at Khartoum airport, the force led by the African Union and United Nations said in a statement that did not identify the kidnappers or say where the soldiers were released and whether a ransom was paid.

Conflict has raged in Darfur since insurgents took up arms against Sudanese government forces in 2003, complaining that Khartoum had neglected the vast, arid region.

The two Jordanians were kidnapped in Kabkabiya in northern Darfur in August. Both men were in good health after their release, the international force said.