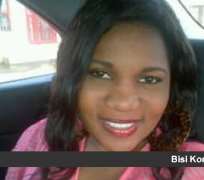 The beautiful actress, who is believed to have relocated to the United Kingdom with her fiancÃ©, died on Monday at the University College Hospital, Ibadan, Oyo State.

The cause of her death was unknown as at press time.

Sources, however, told The Eagle Online that Komolafe has been ill for a while.

Komolafe will be remembered for her role in several films in the Yoruba movie genre.

Her beauty was so captivating it led to a face-off between two actors - Yinka Qaudri and Dele Odule,

They both wanted to be her lover.