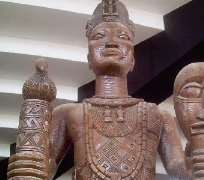 Whenever the elephants fight, it the grass that suffer. Sometimes the suffering can just be painful as embarrassing. Our royal fathers behave as if their grassroots lack historical background of how they come to be. Most of these boil down to self-aggrandizement by whoever commands the most political clout. No matter what, Ooni stands for Oduduwa.

It is undisputed that on his way from Benin back to Ife, Oranmiyan thought about going back to the Middle East to avenge the sack of his father, grandfather or the Great One, Oduduwa. The Great One himself on his return to Ife had to demonstrate proof that he was the son of the soil. What is clear is that Oduduwa the first existed before the life of Christ or Mohammed. Nobody lived long enough to be that many Oduduwa.

In fairness to Alafin, the grudge he has against the Ooni of Ife, that occupied his father’s throne started from his return from Benin when he met Ooni on the throne. Oranmiyan, that is another great one that the Alafin was, moved on to Oyo to create another empire just as his older brothers and sister did elsewhere. By right other Oba in Yoruba lands were entitled to Ooni’s throne but they were not the chosen ones.

When Yoruba call you Omo-Oduduwa, it does not mean your own father is Oduduwa or Awolowo is the direct son of Oduduwa. By African culture, it takes a village to raise a child and all fathers in the village are our father just as all mothers are our mothers. Even foreigners call others their papa and mama. The U.S President Baby Bush always referred to our papas and mamas, not your or their father. But it gets complicated these days and even more so amongst our children.

The simplest way to understand it, especially for none-Yoruba is an embarrassing situation between father and daughter that went to a school event. Teachers at the event asked who the father came to support. He answered that his daughter. When they told the daughter that they just met her father, she said that was her uncle!

Sometimes, other people’s traditions merged into ours causing confusion for our kids, but not for our royal fathers. They know better. It is the political environment and sometimes business connections that should have been relinquished after Oba succession into exalted thrones that blind their respect for one another. Centuries before Nigeria was formed, Yoruba culture and religion were legendary.

Arabs and others had known about Yoruba in the Middle East and written about them, contrary to Bala Usman that Yoruba was named by Hausa scholar Dan Masani. Timbuktu theologian Ahmad Baba (1556-1620) a distinguished scholar had complained: only none-believers of their religion like Mossi, Gurma, Busa, Yarko, Kutukul, YORUBA, Tanbugbu and Bobo could be owned as slaves. That was long before Dan Masani was born in 1595. See Prof. Ekeh’s The Mischief of History. http://www.edo-nation.net/ekeh1.htm

Curiously, Oduduwa suffered identical fate as Pharaoh Akhenaten that ascended the throne in 1352 BC. Known as the Heretic King, he was the tenth King of the 18th Dynasty noted for abandoning traditional Egyptian polytheism and introducing worship centered on the Aten, which is sometimes described as monotheistic as Orunmila. He retired to the South of Egypt like Oduduwa and the Queen of Sheba.

Both Christian and Muslim had known Yoruba as stubborn unbelievers of their religions. It is not surprising since Yoruba only believe in only one God, Orunmila the creator of lesser gods, saints and deities like Jesus and Mohamed. It was the Oduduwa Middle East Oranmiyan was contemplating vengeance against on his way back from Benin, Ile-Ibinu.

Getting to Ife, Ooni was already serving as his father, stepfather or the father of all Yoruba. Even his older brothers have gone out and established themselves all over Yoruba land. Instead of going back to Egypt, he too proceeded to establish Oyo Empire that became the protector of Ile-Ife. Ooni, like the Supreme Court without enforcement power was fortified by Alafin, the General of all Yoruba Empire nobody dared mess with.

The Alafin of Oyo whose mother was Tapa was Shango. Credited with creating gun powder from kola nuts, after his death, he became a demigod. He was well known beyond Africa and stories were told about Oba Koso. Pedral quoted Morie’s work in Coptic text in 1666 - “Obba Kousso” known as King Shango and the King of Kush who ruled north and west of Africa, born in Ife. Morie had no idea where Ife was, but Pedral compared his love life and that of Amon (Kham) and Mount.

The problem with Oba of Benin is also personal. His father, Oranmiyan left Ile-Ibinu out of frustration. On his way back to Ife, he thought about where his great grandfather, Oduduwa was overthrown, returned home rather than be taken as slaves. Whatever the Oba of Benin says today about Ekaladerhan as his new father aka Oduduwa, he cannot erase the fact that he leases from Ogiemien, Ogiso land because he came from Ife.

If his father was Ekaladerhan from Ogiso land, Eweka and his grandchildren would not be renting from children of Ogiso. Some of Oranmiyan frustrations in Ile-Ibinu were later settled by Oba Ewedo requesting Ogiamien Ode to sell the land to him. He refused. So, a Treaty was struck requiring Ogiamien as the traditional landlord of Igodomigodo kingdom, to sell part of the land to the Oba at the coronation of every successive Oba. The Oba elect first had to present nominal gifts only to lease from Ogiemien:

Each of these Oba must respect one another and the representative of Oduduwa, Ooni.