IBADAN - FORMER Governor Adebayo Alao-Akala of Oyo State has said the defection of Dr. Omololu Olunloyo, ex-governor of the state  to the ruling Action Congress of Nigeria, ACN, did not move the Peoples Democratic Party because he was not significant.

Dr. Olunloyo defected to the ruling party some weeks ago.

According to Akala who spoke at his Ogbomoso residence during his annual Christmas party,  'He is not significant as far as I am concerned. If Alao-Akala should decamp to another party now, you can imagine how many people will move with him compared with that of Olunloyo. 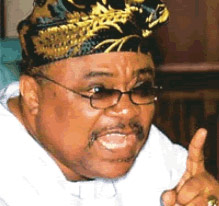 Akala
'So, that cannot move us a bit. We are still together in the PDP. We are everywhere across the state and by the grace of God, we are going to make it in the end'.

To Akala, the erudite ex-governor did not have any electoral value that could warrant any anxiety over  his defection.

Akala said: 'Those defecting are political jobbers. Take a look at the pedigree of such people and you will be able to determine their substance. They are parasites. They just always want to hold on to something. Anybody who thinks those people matter is just making a mistake'.

'For Olunloyo, I ask, who is Olunloyo? Olunloyo is just somebody, who does not have pedigree. His problem is that he is consistently inconsistent. He is not a politician. What is his electoral value? He has no electoral value. If he has decamped, let him show us his followers.

'Who will follow him to ACN? Can he command any following? At the beginning of our government, we only accommodated him. Successive governments have been accommodating him because he was a former governor. I am an ex- governor and so I deserve such a privilege also. He has never been a member of the PDP. He is not a card-carrying member.'

The Ogbomoso-born PDP chieftain described as complete falsehood the rumour that he petitioned the national secretariat of the party over the crisis within the party.

'It is not true. I didn't petition the national headquarters. I know Oyo PDP very well and I know our problems and so I went there to offer them solution about the problems of Oyo State and that is exactly what they are now pursuing to ensure that we are one. And by the grace of God, in the new year, we shall become one.

He stressed: 'At every level, we have leaders we respect. It starts from the ward, local to state levels. At every respective area, everything is now in harmony. We don't lord anything over anybody.

'At Ogbomoso, for example, we let our members decide what they want. Even in Ibadan, they tell us what they want. Same applies to people in Oyo and the people of Oke Ogun.'