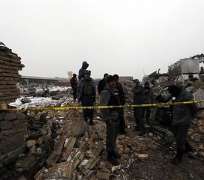 Afghanistan's Taliban movement claimed responsibility for a suicide bombing in Kabul on Monday which targeted a U.S. contracting company and killed two Afghan civilians, underscoring security challenges ahead of a NATO pullout.

Hours earlier, a blast in eastern Afghanistan killed 10 Afghan girls, between nine and 11 years old, as they collected firewood.

The Taliban and its allies have staged high-profile attacks in Kabul over the past few years against Western targets, including embassies. Attacks on Western companies are rare.

"A suicide car bomber attacked an important American company which is involved in security," Taliban spokesman Zabihullah Mujahid said in a statement.

"The company was under our surveillance for a long time and today we succeeded."

After more than a decade of war against Western forces with superior firepower and technology, the Taliban remain a potent force capable of striking in the heart of Kabul.

Many Afghans fear the Taliban, who were toppled by U.S.-backed Afghan forces in 2001, will push to seize power again after most NATO combat troops leave by the end of 2014. They also worry another civil war could erupt.

The Afghan government says the Taliban have no chance of taking over and that police and troops can take control once Western forces pull out.

An Interior Ministry spokesman said two Afghan civilians were killed in the Kabul attack and that the 15 wounded included two foreigners.

The Virginia-based company that was targeted, Contrack International Inc., has built fuel storage systems in military bases in Afghanistan.

EXPANDING REACH
After the blast, Western men clutching weapons walked outside the company compound as ambulances sped by. A NATO soldier walked by parts of a building that was torn apart by the blast, which left a large crater. A brick wall collapsed.

The NATO-led International Security Assistance Force (ISAF) said the blast occurred near Camp Phoenix, a U.S. military base where Afghan soldiers are trained.

"The attack did not seem to be directed at ISAF forces," said Lieutenant-Colonel Les Carroll, an ISAF spokesman.

The Taliban have expanded their reach beyond their strongholds in southern and eastern Afghanistan to some areas in the north which were relatively peaceful for years.

It was not immediately clear what killed the girls who were collecting wood in volatile Nangarhar province in the east. It could have been a bomb planted by insurgents or, for instance, a landmine left over from decades of conflict.

One official in the area said they were apparently killed by a rocket warhead which exploded while they dug it up from the ground out of curiosity.