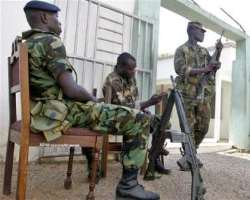 An epic bloody showdown opposing the army and the Movement for the Emancipation of the Niger Delta (MEND) and other militants who have rejected the amnesty offer by President Umaru Musa Yar'adua looms large as the deadline for militants to handover their weapons draws near.

Yar'adua offered an amnesty to the Niger Delta militants who want to lay down arms but only two MEND commanders have accepted the offer up till now. The others have vowed to continue fighting. The amnesty deadline expires at midnight on September 16. President Yar'adua ordered the army into a state of high alert ahead of a planned pre-emptive military strike on the Niger Delta.

Huhuonline.com has learnt from impeccable Presidential sources that a joint amphibious attack involving the army, the navy and the air force will be launched to decapitate and dislodge the militants from their hideouts.

Sources told Huhuonline.com that the President wants to assert his authority and is hell-bent on restoring order in the strife-torn Niger Delta “at all cost” to halt the economic sabotage that has cut into the country's oil output, forcing Royal Dutch/Shell and Chevron to declare force majeure on several oil fields and cutting oil production by as much as 580,000 bpd.

Israeli Gunboats
While waiting for the cease fire with MEND to run out, the President has given the go-ahead for the army to procure two Israeli Shaldag MK-2 patrol boats to patrol the Niger Delta and prevent attacks on oil platforms on the high seas. Huhuonline.com learnt from Nigerian Defense Intelligence sources that the first armed corvette vessel has already been delivered to the Joint Task Force (JTF) and the second is on the way. About 80 Nigerian seamen are presently being trained on terrorism and counter-insurgency operations at the northern Israeli port city of Haifa.

Huhuonline.com previously reported that the Nigerian Navy bought six Manta-class offshore patrol vessels from Malaysia and Singapore last year. The Navy requested and procured 35 new machine-gun equipped fast patrol boats, which, on the instructions of the Presidency, were paid for by the Nigerian National Petroleum Corporation (NNPC).

The first consignment of two 38 meter Manta-class patrol boats built by the Nautica Nova Shipbuilding yard in Malaysia and fully financed by NNPC have already been delivered to the Navy. Defense ministry sources told Huhuonline.com that another four 17 meter Manta-class patrol boats from Singapore Technologies Marine have also been delivered while talks are currently underway with French and British shipyards.

Huhuonline.com understands that France's DCNS (Direction des Constructions Navales Services) - a naval defence company and one of Europe's leading shipbuilders - had long hoped to sell Nigeria several of its small Gowind-class corvettes for a total cost of $800 million. In its bid the French shipyard was backed by France's procurement agency, Délégation Générale pour l'Armement(DGA), which sent several lobbyists to Abuja last year.

But the proactive Israeli lobby in Aso Rock prevailed on the President and Israeli Shipyards were chosen to supply the patrol vessels, which are reportedly less costly but also considerably smaller (24.8m) and hence easier to operate in the Delta creeks than the French patrol boats.

Since the early 2000s Israel has drawn closer to Nigeria. Before he was named head of Mossad, Israel's foreign intelligence agency, in 2002, Meir Dagan visited Nigeria prospecting on behalf of several Israeli defense companies. Huhuonline.com checks reveal that in 2006, Israel's Aeronautics Defense Systems (ADS) signed an agreement with then-president Olusegun Obasanjo to install a surveillance system for the Delta and Nigeria's territorial waters with Aerostar unmanned aerial vehicles (UAVs) and unmanned Seastar vessels.

The Israeli daily Haaretz's revelation of the contract negotiated without the authorization of Israel's defense ministry resulted in its cancellation, and the Nigerian defense ministry lost money that had been advanced to ADS. In addition to Shaldag patrol boats, the Nigerian Navy has acquired 20 troop-carrying catamarans from the Dutch yard TP Marine. To conduct effective operations in the Delta, the armed forces will need to quickly dispatch soldiers up creeks and rivers in the area. The catamarans are aimed at measuring up to MEND's outboard vessels. They will be operated by the Joint Task Force, an inter-service unit in charge of operations in the Niger Delta.

Russian Helicopters.
One strategic advantage of the JTF over the Niger Delta militants is air superiority. The Air Force has indeed ordered four Agusta A109E helicopters as well as Russian MI-24 and MI-34 helicopters. The Italian Agustas haven't yet arrived, but sources told Huhuonline.com that the Russian aircraft were delivered just before Russian president Dimitri Medvedev's visit last June.

However, an Air Force source told Huhuonline.com that Nigerian pilots are having trouble getting used to the large and highly sophisticated helicopters and only Russian instructors sent to Nigeria are able to fly them at present; raising the grim prospects that Russian pilots might be called upon to take part in the planned attack.

Whether this latest show of force by the Yar'adua government will end the long-running militancy in the Niger Delta remains to be seen. But this latest effort at rearmament by the army only goes to vindicate hard line elements within MEND who have vowed never to renounce their militancy.