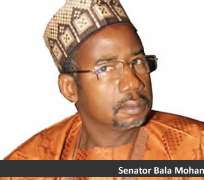 The Presidency is angry with the Minister for the Federal Capital Territory, FCT, Senator Bala Mohammed for demanding 80 percent of a land a Malaysian group acquired for a mass housing project in Abuja.

A 14,000 housing units project, known as Malaysian Gardens, was launched by former President Olusegun Obasanjo in 2006 and is located on about 500 hectares in Saraji District of Abuja.

Outgoing Malaysian High Commissioner Dato Nik Mustafa Kamal Nik Ahmad alleged in a letter to Jonathan dated June 14, that the notoriously corrupt FCT minister Bala Mohammed, regarded as the worst the capital city have had, is demanding for 400 hectares of lands which amounts to 80 percent of the total land area allocated for the housing project.

The source noted that the action of the Minister is capable of driving away potential foreign investors and further dent the anti-corruption crusade of the Government.

'How can a Minister be demanding for 80 per cent land duly allocated to the Malaysian investors as part of Government's drive for foreign investment'? The President is really upset about it.'

The source who did not want to be named revealed that an investigation has been ordered by the President on the matter with a view of getting to the root of the allegation.

According to the source, it is after the Minister was informed about the feeling in the Presidency that he hurriedly put up an advertorial in the dailies on his own side of the story.

The source further hinted that the FCT Minister is one of those listed for sack as soon as the Presidency concludes plan for cabinet change early 2013.

Controversy started following a petition by the Malaysian High Commission to President Jonathan in which it accused the FCT Minister of demanding 80 percent of the lands.

The Malaysian Ambassador alleged that the Minister demanded that the Nigerian partner be changed with someone of his choice as part of the conditions for the approval of the building plans which have been pending before the FCT authorities for eight years now.

Ahmad’s letter was published as an advertorial in the Daily Trust newspaper last week. The letter was written to Jonathan as a follow up to discussions with the outgoing envoy during his farewell visit on June 7.
He said his only regret during his tenure was on the stalled Malaysian Gardens project.

“The minister on 21 February 2011 had threatened to take back the land unless the developer agrees to give as much as 400 hectares to him which is 80 per cent of the total area of land of the project which will effectively kill the mass housing project,” Ahmad said in the letter.

“The minister even hinted the possibility of using EFCC and the Police against the developer if his demands are not met. All efforts to find amicable solutions failed. Senator Bala Mohammed has refused to approve all the engineering drawings or even to register the housing project,” he added.

Pointblanknews.com is currently conducting an investigation of the rot in the FCT Ministry under the leadership of Senator Mohammed as a Special Report.