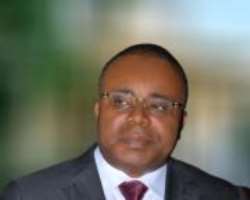 Umana Okon Umana does not only think that he owns Akwa Ibom State, he also believes strongly that he is Akwa Ibom State. In a way, he is! At least since 1999, the man has been the only Akwa Ibom man to walk the corridor of power for as long as he has. By the time Akpabio leaves the office in May, 2015 (assuming he will), Umana Okon Umana will be in the power corridor sixteen years, beginning from the administration of Obong Victor Attah.

On the surface, his record appears impeccable; Director of Budget, Permanently Secretary (Ministry of Finance), Commissioner (Ministry of Finance), and now the Secretary to the Government. This does not include the once-in-awhile special appointments, such as an appointment of him by Godswill Akpabio as the Chairman of Ibom Industrial City Project in Mbo Local Government in Oron, a project which turned out to be a conduit for money laundering; till this day the Ibom Industrial Project, which was lauded to create 200,000 jobs, has not taken off the ground, despite billions of naira expended so far.

No one can dispute the on-the-job experience and Mr. Umana's full knowledge of the inner operations of Akwa Ibom State Government and politics. And no one will also dispute the truth that with years of occupying high top positions in government, Umana Okon Umana has used the opportunity to make perfect his corrupt practices. Umana Okon Umana is a corrupt public official, who has collaborated with Godswill Akpabio since 2007 to loot the treasury of Akwa Ibom State dry, resulting in grinding poverty, acute hunger among the masses, and sporadic payment of worker's' salaries and sometimes outright non-payment.

Before becoming a public servant, Umana Okon Umana never owned, operated, or acquired any business. As a career civil servant, he is supposed to be on a fixed income. Today, he is the richest man in Akwa Ibom State and one of the richest men in Nigeria. His holdings as wealth include the alleged recently acquired a 10% of 49.9% equity shares of Bilfinger Berger of Germany, an international affiliate of Julius Berger Nigeria PLC. It is worth disclosing here that Umana Okon Umana is the chairman of the Finance and General Purpose Committee (FPGC). Because of his influence, a recent Internet report confirmed that Akwa Ibom is the only State in Nigeria that is awarding state contracts to Julius Berger without any recourse to due process or competitive bidding procedures for contract awards.

Come 2015, Umana wants to top-off his credentials with the title of “Governor.” In spite of public denials, the man has flooded Akwa Ibom State with campaign vehicles, T-shirts with his campaign loco are in prints, his thugs are busy recruiting foot-soldiers expected to steal voting materials (as it happened in 2011) so that Umana can win, no matter what. Nijaleaks published an article that on Friday, October 5, 2012, Umana invited 100 leaders of his thugs to a conference at the Monty Suite in Uyo. When Umana showed up for the conference, he came with more than N50, 000,000.00 (Fifty Million Naira), which was shared amongst the thug leaders, each taking home between N250, 000.00 and N500, 000.00. According to the report, “it almost caused a stampede, as people were seen sharing cash they could not account for.”

Many Akwa Ibom people contacted have already made up their minds towards the political ambition of Umana Okon Umana. Some say the only reason Umana wants to be a governor is to continue in his quest to loot Akwa Ibom State Treasury. Others say he wants to be a governor so that he can protect himself and Godswill Akpabio against possible criminal investigations, such as for money laundering, inflated costing in contracts, and general abuse of power, which may be inevitable after they leave their positions in May, 2015. But Umana is not perturbed by what he refers to as “the ranting of my enemies.” He is set. He is discreetly campaigning. And he is spending money, a lot of money.

In spite of what his critics say, Umana has supporters. But if anyone asks his supporters for reasons they think he should be the next governor of Akwa Ibom State, all one will hear is this; “The man has money.” Ask again and this is what they will say; “Oh the man is the one with money to win the election.” Continue asking, finally they will say; “He is the only Ibibio man with money to win the election.”

While everyone has the right to support or not support a political candidate, it is sometimes amazing how anyone can have the nerve to distant Umana Okon Umana from the ills of Godswill Akpabio's administration. When this writer asked some of Umana's supporters why they want to support a man (for governor), who has been associated with all the killings, all the kidnappings, all the assassinations, all the stealing, raping, and all the political detentions on trumped up charges, I would be told that Akpabio did all those, not Umana.

If Umana Okon Umana was an underling in the administration of Akpabio, maybe I would listen to such arguments. But for a man, who is a member of the Executive and the highest-ranking civil servant, Umana Okon Umana is guilty by association. In fact, this is the one single reason many of his critics, including this writer, do not feel that for a man whose hands have been so soiled by the ills of Akpabio's administration, he should not be the next governor of Akwa Ibom State.

It is important to state here that while Umana Okon Umana is the talk-of-the-moment and the only known person who has made public his desire to occupy the Hilltop Mansion, other yet-to-be-known individuals are lurking in the corner. Among them are Bassey Albert Akpan (the present Commissioner in charge of Finance), Ibanga Albert Akpan (Bassey's brother), Nsima Ekere (the recently fired, sorry, resigned, Deputy Governor), Samuel Akpan (the architect of AKPF—Akpabio's once dreaded secret police). Analysts agree that before the end of 2013, individuals with personalities that may end up changing the course of Akwa Ibom State politics for the 2015 gubernatorial race will emerge. Insiders say if that happens, Umana Okon Umana will be insignificant, his large storage of money notwithstanding.

According to one insider, who did not want his name mentioned, “Nobody likes Umana. The reason you see people rush to him like flies is because of poverty in Akwa Ibom, they want money, they don't want Umana. What has Umana got to offer the people that he couldn't since 1999? He has nothing to offer, except another opportunity to steal more of our money. When the right candidate emerges, we will support that person. Meanwhile, let Umana bring out all those stolen money, we will take it. It is not his money anyway.”