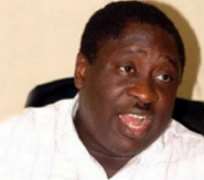 SAN FRANCISCO, November 29, (THEWILL) – The arraignment of Dr. Wale Babalakin and four others by the Economic and Financial Crimes Commission, EFCC, for offences bordering on money laundering could not go on, Thursday, as the court was told that Babalakin is on admission at the Lagos State University Teaching Hospital.

When the matter was called up today, Counsel to Babalakin, Ebun Sofunde, SAN told the court presided over by Justice Adeniji Onigbanjo that his client is currently on admission at the Lagos State University Teaching Hospital for an undisclosed ailment.

Sofunde said he had earlier forwarded a letter to the registrar of the court which contained a medical report by one Dr. Charles Harmon about Babalakin’s health situation.

But EFCC Counsel, Rotimi Jacobs, SAN expressed displeasure at the turn of event saying he was shocked that Babalakin choose to go against the grain of the understanding he reached with the Commission when he was granted administrative bail on November 26, 2012.

He was served with all the processes and he made additional statements on that day. He came with Dr. Layonu, a Senior Advocate of Nigeria as his surety and he was granted administrative bail with an undertaking that he will be produced before the EFCC yesterday or early this morning for him to be arraigned. If at all there is a medical issue, it should have been communicated to us so we can verify,” Jacobs said.

He lamented that it took the Commission's Operatives one week before Babalakin could be arrested and was released on bail having produced a reputable Senior Advocate of Nigeria, as surety.

However, Sofunde, SAN, apologized on behalf of his client. He said he was not contesting the fact that the first defendant was granted bail on 26 November, 2012 which was the same day that the medical report was generated. He explained that the medical report said his client's health condition degenerated, and requested for a short adjournment to allow his client recover from the undisclosed ailment.

Tayo Oyetibo, SAN, appeared for the second defendant, Alex Okoh and his company, Renix Nigeria Limited. Oyetibo urged the court to retain his client on an administrative bail earlier granted him by the EFCC pending the substantive arraignment proceedings. Bolaji Ayorinde, SAN, who appeared for Stabilini Visioni Limited and Bi-Courtney Limited also sought for an adjournment.

Justice Onigbanjo adjourned the case to 12 December, 2012 and directed the EFCC to verify the claims on the medical report submitted by the first defendant and whether he is truly on admission at LASUTH.

He granted Alex Okoh the relief he sought to continue to enjoy the administrative bail earlier granted him by the EFCC.

The EFCC is alleging that Babalakin and others between May and September 2012 fraudulently helped Ibori oil his money laundering machine to transfer various sums through Interactive Technologies Limited, Sopetrol Oil and Gas Limited, Casaka Nigeria Company Limited, Geofluids Limited, ABS Limited and Hyundai Heavy Industries Nigeria Limited to Erin Aviation account in Mauritius for the purchase of a Challenger jet.