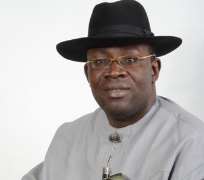 LAGOS, October 29, (THEWILL) - The Peoples Democratic Party (PDP) has congratulated the Executive Governor of Bayelsa State, Chief Seriake Dickson on Monday's judgment of the Supreme Court which not only reaffirmed him as the duly nominated candidate of the PDP but confirmed his overwhelming victory at the February, 2012 Bayelsa State governorship election.

In a statement in Abuja by the National Publicity Secretary of the PDP, Chief Olisa Metuh, the Party said the Supreme Court judgment is not only a victory for the people of Bayelsa who gave their mandate to Governor Dickson but an endorsement of the inviolability of a just and properly constituted internal democratic process of the party.

“Our great Party is ever mindful of the noble responsibility which our leadership position confers on us. Our determination on the entrenchment of internal democracy as a fundamental to every party process is clear. This firm resolve shall not waver. This judgment of the Supreme Court is therefore an incentive on our resolve to build a better party."

The Party further commended Governor Dickson on his development strides and urged him to remain focused.

"The PDP rejoices with Governor Dickson and the entire people of Bayelsa on this well deserved victory. It is our expectation that with this distraction off the way, the Governor who hit the ground running, will only increase the tempo of massive infrastructural development that has literally turned Beyelsa into a huge construction yard," the PDP statement concluded.