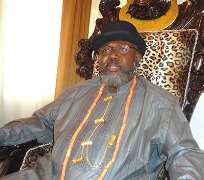 How true is the claim that the gas plant within the disputed area was erroneously called Soku Gas Plant instead of Oluasiri Gas Plant?

Those who made such statement are making a fundamental error. The issue of nomenclature is usually based on proximity to the wealth. If you know the terrain, you will understand that the gas plant itself is only one and half kilometres from Elem -Sangama and it is also two and half kilometres away from Soku itself. Oluasiri is further away; Oluasiri is 3.4 kilometres away. So, there is no way those who are naming the facility would consider Oluasiri first before Soku or Elem-Sangama. The communities that are closest to the gas plant or the oil wells are Soku and Elem-Sangama and these are all Kalabari territories. They are within the Rivers State geographical map.

Is it true that Rivers does not have any community around the disputed oil wells?

To what extent has President Goodluck Jonathan been involved in this disputes?

The dispute has been there for several decades. Initially, they were disputes that arose from fishing rights and we have managed to sort these things out. We are brothers and they have shown us our demarcation, the areas to face, the settlements and all that, and we have been managing the situation. We adhered to this all through the Civil War period up to the creation of states and until when Bayelsa State was carved out of Rivers State. That culminated in the 10th edition of the map we are talking about. So the disputes have been there, but they have been handled properly and the 10th edition took care of everything. What we are saying is that there was a publication they called the 11th edition that contained certain errors as admitted by both the boundary committee and other agencies.

These errors are supposed to have been corrected in the pending 12th edition. Now, the correction has not been effected. Suddenly, we are finding that the boundaries have started to move left, right and centre. So, what we are saying is that these errors ought to be corrected and the proper edition, which is the 12th edition, be produced. Even the Oluasiri land that we are talking about is principally a fishing settlement that has grown and that settlement is owned by the Odual people. You cannot have boundaries looping and pulling people away. Normally, the way we behave in the Niger Delta, if you are a fisherman, you would need to go and settle somewhere and we do not really bother people. You can pay tenancy rates and so on. In some areas too, they would just let you stay. From our history, the Oluasiri settlement is clearly within the territory of the Odual people and they are people in Rivers State. That one is a settled matter.

How come the dispute degenerated to the level that lives were lost in 1993?

That situation was not because the Kalabari people were aggressive. What we discovered was that the Nembe people apparently moved in some of the Kalabari territories and started trying to forcefully occupy those areas. It was resisted and that culminated into the fracas that occurred. But the government set up a panel of enquiry, which tried to resolve the issue.

What about the claim that the Supreme Court ruled that Rivers State has no right to stop payment of oil revenue to Bayelsa, especially the N17bn allegedly belonging to Rivers that was paid to the former?

To the best of our knowledge, the Supreme Court did not go to that extent. What the Supreme Court said was that it could not take a decision at that point because the 11th edition had errors. It asked the National Boundary Commission to produce a 12th edition and rectify the errors so that it can use that to give its ruling. We are not aware that the Supreme Court said Bayelsa should take the N17bn or whatever amount. The court did not give such pronouncement to the best of our knowledge. But we do know that funds were left in an escrow account and the court did not say that the money should go to any of the states. So, we believe that the payment of any money to any of the parties was in error and we have said that such money should be returned to the escrow account until the final determination of the issue.

Do you think the process of boundary adjustment has been politicised?

We are traditional rulers and we try to avoid issues of politics. What we are saying is that our kith and kin must be left where they are within the Kalabari Kingdom and within Rivers State. The proceeds from their wealth should be for the benefit of these people and their state government. Whatever are the political ramifications of the decisions they want to take, we don't want to be a part of it. All we want is that these are our people and they should be left where they are. If there is a proper boundary decision by the Federal Government, it will take into cognizance our feelings and where we want to go before anything can be done. We are not politicians and we don't want to be politicians.

Second terms have been notoriously unkind to modern presidents.

After George W. Bush won a second term in 2004, the public turned against the Iraq war and derided his administration's handling of Hurricane Katrina; he saw the economy sink into a crisis his successor inherited.

Bill Clinton's second term was defined by the Monica Lewinsky scandal that led to his impeachment. Ronald Reagan managed to push through a tax overhaul in his second term, but he also became enmeshed in the Iran-contra affair.

Still, the presidents regarded as the most influential in U.S. history have generally served more than one term, from George Washington and Thomas Jefferson to Abraham Lincoln and Franklin Roosevelt. With the possible exception of James Polk, who in a single term expanded U.S. territory to the West, it generally has taken presidents more than four years to leave a lasting mark on the nation.

Now, Obama will have an opportunity to do that.