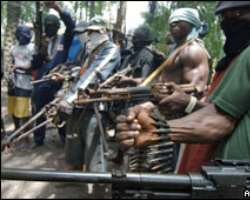 
Around 700 people were killed in the city at the centre of the recent wave of violence in Nigeria, according to a senior regional military official.

An earlier tally of victims of the unrest, in which police battled Islamists, put the figure at 400.

Col Ahanotu said the compound of the Islamist sect behind the violence was being used as one of the burial sites because bodies were decomposing in the heat.

Maiduguri is the capital of Borno state but the fighting spread to cities across the north of the country and the total death toll is unknown.