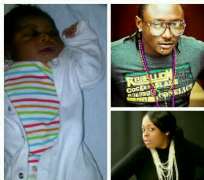 News reaching Nollywoodgists.com confirms that Terry G, has welcomed the arrival to his family as his UK-based girlfriend, Mimi Omoregbe gave birth to a baby boy last night. The singer, who hit limelight with his hit single 'Free Madness', is now a proud father.

A close source to Terry G confirmed to Nollywoodgists.com in a phone call when contacted. We also confirmed that the mother and child are in good condition. There are still controversial reports that Terry, who is also fondly called 'The Ginger Master' is not yet married to Mimi after initial reports put it that they secretly performed a traditional marriage rite.