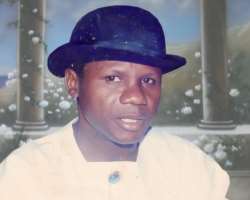 The man Hon (Dr.) Barinem Nubari Kiobel, though has gone to be with God is Heaven, the drops of tears that gushed out of his dying eyes have started wetting the fabrics of society. He was defenseless as a mortal, but now his pious spirit is hovering across the dwelling places of his killers, whispering guilt into their ears.

The thought of how passionate my husband was, energizes me to continue fighting for his vindication, for he was a man of peace, who believed in justice. His death was a wrongful one, it was a clear act of genocide; the zenith of human rights violation.

It is a shame the Nigerian Government would connive with a foreign corporation to kill such a priceless and pride-exuding son of the soil, whose credential meant hope for the nation. He was academically endowed, and earned the suffixes of PhD MCOM, MBA, BBA, DIPM DIPMGT-ABE MCIM MINSTT, among other accolades.

Dr. Barinem Nubari Kiobel was born in Kpor Town in Gokana Local Government Area of River State in the oil-rich Niger Delta region of Nigeria. He was born into the family of Madam Vurage Kile Diiyor (mother) and Chief Francis Kiobel Barika (father) on September 23, 1959.

• 1987 – 90. PH.D – Doctor of philosophy in Tourism Planning and Development Strathclyde

• 1992-93. He was a senior lecturer in the department of Business Administration, faculty of Management Science at the Rivers State. University of science and technology, Port-Harcourt.

• Jan 1993 – Jan 1994. He became Chairman Publicity committee of Kilsi Gokana, an organization, which was a body of educated elites, formed for the development of Gokana. As chairman of the publicity committee of the organization, he enlightened fellow members and entire Gokana kingdom of Ogoni tribe of the need to embrace Federal Government effort to address Ogoni demands, along with other oil-producing communities through the OMPADEC.

Through his effort, the Commissioner for Community Relations in OMPADEC visited Gokana kingdom and addressed the people of Ogoni successfully.

• Jan 1994 – July 1994: He was an Honorable Commissioner in charge of the Rivers State Ministry of commerce, Industry and Tourism.

Duties/Responsibilities
As (Hon) Commissioner for Commerce, Industry and Tourism, his major achievements were as follows

• He successfully re-organized the Ministry of Commerce, Industry and Tourism, which until then was only a Bureau, into a standardized well-organized ministry of repute with high measures level of performance and productivity among workers.

• Reverend Dr. Nwator Peace Panel, which was set up by the (Hon) commissioner Dr. Barinem Nubari Kiobel to investigate causes of crises between k-dere and Bodo city communities in Gokana, and to make recommendations for achieving lasting peace. As a result of the said panel's report and recommendations, peace reigned between the two communities.

• During his tenure of office as (Hon) Commissioner for Commerce, Industry and Tourism, his high level of performance in conflict management was demonstrated through moves to return peace to Ogoni land after conflict with the Andonis leading to closure of Rivers States polytechnic Bori. He took a huge risk to intervene as an indigenous commissioner, however this stride, as well as the high level of Diplomatic maneuvers he displayed, led to general acceptance by the locals to guarantee security of staff, students and all strangers at Bori and the polytechnic. The agreements reached with the locals, and his personal pledge to the people and River State government guaranteeing security for all, led to the reopening of Rivers State polytechnic, which was closed since May 1993.

The above achievement made him to be highly loved and honored by his people, the Ogoni tribe of Rivers State of Nigeria. In addition, during his position in four man committee MOSOP in Kpor Gokana chapter, he also brought peace, progress and unity to the entire village.

Other official engagement/relationship he had with the Rivers State Military Administrator. Lt. Col D.M. Komo, and the Honorable Minister of Commerce and Tourism, Chief Melford Okilo was very remarkable, and contributed highly to the success of the implementation of the national oil museum, Oloibiri Project. As a good citizen of Nigeria, Dr. Kiobel contributed positively to the progress of his people and community. He earned the loyalty and admiration of his people; he was a hero, so to say, which made Komo and Shell (SPDC) to consider him the perfect candidate to be used for their evil plan. And in a fiat military fashion, they summoned him to be part of their executive meeting, convey at the Government House, Port Harcourt, where they tried to bribe Dr. Kiobel to betray his people and his conscience. Alas, the outcome was not what the evil-plotters expected, thus the perpetrators got disappointed, and connived to get rid of my husband at all cost. They decided to portray my husband, Ken and the rest of them as criminals.

Even with the passing years, the horror is fresh in my mind's eye; I still cannot believe what happened, seeing my husband and his fellow owners of the land – sons of the soil - being maimed, killed in the most ruthless manner, and acidized, just because they spoke out to possess back their freedom and wealth, was the zenith of man's inhumanity to fellow man.

One thing I know for sure is that my husband's blood will continue to cry out as the biblical Abel did, until justice is served. I will continue fighting for justice for myself and my husband and the oppressed, with God's help I shall succeed.

He was a great husband, brother, father, best friend and playmate. He was a loving guy with a good heart. He loved and respected everyone around him. He always told me that he did not mind if he died for his people, whenever I approached him about his security. He would laugh and say, “Darling you are still a baby, I tell you what, God is our security, and without him we cannot do anything.”

Corporations like $hell (SPDC), who enjoy the privilege of doing business in America and all the other pay back of corporate personhood, should be answerable for their role in gross human rights violations. My desire is for our case to become a legal precedent by which present and future victims of human rights violations can turn to United States court for relief, as provided by the Allen Tort Statues of 1789.

Shell (SPDC) is fighting hard for the case not to be heard because they know that I do have evidence. During the deposition at Philadelphia with shell's lawyer, she was outraged at the first evidence shown to her. She was silent for a while, and then proceeded to ask me how much I was suing for. I replied her that I wanted justice for my husband and my family period! I challenge Shell not to be run away from justice, instead to prove they are not guilty. My late husband's blood is crying out looking for justice. Seeing my husband's killers, the perpetrators of human rights violations out there loosed and free, whereas many innocent people are incarcerated around the world, is extremely frightening and painful.

Hon. (Dr.) Barinem Nubari Kiobel was a man with a prodigious heart that cared for others. A kind-hearted man that was selfless. He was a wonderful husband, God-fearing man, good father, brother and best friend. He was a man of timber and caliber. He has been very much missed and will always be remembered. His death was a wrongful act!