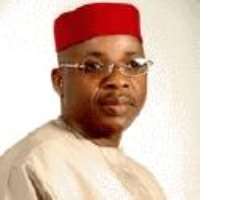 If Gov. Ikedi Ohakim of Imo State thinks he has taken over the state Peoples Democratic Party (PDP) structure following the handing over of the PDP flag to him by the party's national chairman, Prince Vincent Ogbulafor, at his recent defection ceremony from Progressive Peoples Alliance (PPA), he was wrong, according to a major stakeholder in the state PDP.

It could be recalled that at his recent defection ceremony held in Owerri, the Imo State capital, Governor Ohakim was handed over the PDP flag by the PDP national chairman, who also announced the dissolution of the state exco of the party in a thinly veiled declaration that the party machinery has been handed over to the PPA elected state governor.

He said: “The leader of the party is the governor that is how it is practised everywhere in Nigeria. He was given the party's flag, it simply means we welcome you back to PDP fold. It does not mean you have taken over the party structure.”

Okorocha while hinting of his displeasure with the impression that Ohakim has been handed the party in the state, warned that the practice was likely to have negative repercussions. “This is where PDP needs to make some adjustments,” he said.

The former presidential aspirant stressed that the cross-carpeting of Ohakim to the PDP should not make the party complacent but that the party should conduct a proper congress in Imo State.

Speaking further on Imo politics, Chief Okorocha berated former governor of Abia State and PPA leader, Dr. Orji Uzor Kalu, for creating the impression that he is the power behind Imo State politics.

“Orji can say in Abia he is the power there. It is wrong for anybody to assume that he is the power behind Imo politics. It is insulting and embarrassing to all of us, political leaders from Imo State.

“We know ourselves and we all know our level of politicking and political rating. So no single outsider, whether Orji or Obasanjo can claim that he put Ohakim there, we all agreed and accepted he should be there and we know the circumstances that led to his being there,” Okorocha stated.

It could be recalled that Obasanjo at the formal decamping of Ohakim to PDP revealed that he extracted a promise from the governor that he would return to the PDP before he was adopted by the ruling party at the expense of its own candidate in the build-up to the 2007 governorship elections.

Similarly the leader of PPA and former Governor of Abia State Dr. Orji Uzor Kalu has been taking credit for the victory of Ohakim, his party's candidate at the 2007 elections in Imo State.