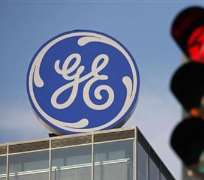 GE, the largest U.S. conglomerate, said on Friday that sales at its aviation and healthcare arms declined 1 percent in the quarter, though analysts noted that overall revenues were hurt by a rise in the value of the dollar - which serves to diminish the reported value of foreign sales.

GE, also the world's biggest maker of electric turbines and jet engines, stood by its forecast for full-year earnings to rise at a double-digit percentage rate.

"The global economy is uncertain, and we are prepared for a variety of economic outcomes," said Chief Executive Jeff Immelt.

Factoring out one-time items, the profit was 36 cents per share, meeting the analysts' average estimate, according to Thomson Reuters I/B/E/S.

"The market will see this as a slight disappointment," after an upbeat late-September presentation to analysts that led some investors to expect stronger growth, said Jack DeGan, chief investment officer at Harbor Advisory Corp in Portsmouth New Hampshire.

"They met expectations for earnings, and they were light on revenues. If you add back forex, they beat."

GE said exchange-rate fluctuations lowered its reported revenue by $1.1 billion in the quarter.

Its shares fell 1.6 percent to $22.44 in premarket trading, giving back a little of their significant gains over the past year.

As of Thursday's close, GE has climbed some 41 percent over the past year, reaching levels not seen since the 2008 crisis and sharply outpacing the 22 percent rise of the Dow Jones industrial average.

ENERGY UNIT OFFSETS EUROPE
The company experienced the sharpest revenue growth in its energy infrastructure arm, where sales were up 12 percent. Immelt had bulked up that business in 2010 and 2011 with an $11 billion wave of acquisitions, largely in the oil and gas sector.

Most major industrials have experienced weak demand in Europe for their equipment as a result of the continent's debt crisis.

GE has been no exception to that trend, though Immelt told investors late last month that European demand has been no worse than the company had expected.

"The most important thing out of the earnings report is that they kept their full 2012 outlook. The fourth quarter, we think, is going to be challenging for companies, especially on the revenue side," said Oliver Pursche, president of Gary Goldberg Financial Services in Suffern, New York. "Them keeping that outlook intact is a positive."

The Fairfield, Connecticut-based company laid out plans last month to cut its selling, general and administrative costs by $700 million to $1 billion next year in the face of the uncertain economic environment.

Immelt has also committed the company to buy back enough shares to lower its share count below 10 billion - its level in 2008. That year GE sold new shares to raise cash during the financial crisis.

GE said it has bought back $3 billion worth of shares so far this year.