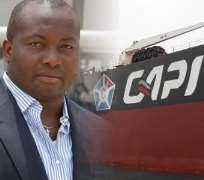 I read with utter dismay that the Managing Director/Chief Executive Officer of Capital Oil Gas Industries Limited and four members of staffs have been singled out hatefully for uncanny humiliation by President Goodluck-led PDP Administration and the Economic and Financial Crime Commission, EFCC. President Jonathan's obsessive demagoguery to keep witch-hunting perceived or imaginary political enemies who are threats to his morbid crave for power retention has always been relentlessly dramatised; pursued vigorously, perpetuated with aggressive rage, and prosecuted with iron fist grandstanding, albeit a woefully traumatised and raped nation that Nigeria has become.

Organisation such as the EFCC which ought to librate the nation from her moral strangulation and revitalise her re-branding has gone the way of her creator - sold her soul to the devils! This is evidence from its preoccupation since it was set up by former president Olusegun Obasanjo. Truly, a nation cannot be greater than its teacher, so it goes for the EFCC. The charade the agency has become since in section simply mirrors the nation's eroded value system and shows what two mirrors can reflect when they are positioned opposite each other - vertically or horizontally. Will they reflect each other's shadows, blank spaces or blind alleys?

Even if Nigeria were a colonial plantation, the minders of the colony would still have modicum of decency to allow a man of Ifeanyi Uba's reputation to be granted bail on his personal recognition for a mere allegation that has not been proven beyond reasonable doubts. President Goodluck Jonathan has demonstrated repeatedly that Nigeria is worse than a stateless entity, where regulatory institutions are whimsically used to rein in imagery foes. This was evidence in the James Ibori's case that was resurrected after several years of lacklustre and listless legal jamboree that ridicules and shocks the Nigerian judiciary to its foundation. Till date, the pliant institution has not recovered from it.

President Goodluck Jonathan, known for his slyness, serpentine and calculative deviousness aggressed in a forlorn like manner against the notoriously corrupt Delta State governor, James Ibori. Not that he was keen at curbing corruption, but to get back at his political mortal enemy. This happened on the occasion of a very senior editor father's funeral at Asaba. The fog has hardly clear on the late President Yar' Adua's health condition and President Goodluck Jonathan, then a Vice President had begun making secret moves to succeed his silk boss while the nation was in dire-straight. It's a know fact that James Ibori was very close to the late President Yar' Adua. Ibori, on the occasion that attracted the mighty and the not so mighty in the society, casually said on the flip side, when the issues came up for casual discussion, saying: "hurry hurry dey tear trousers", meaning President Jonathan should exercise caution and moderate his ambition inasmuch as he would want to be the president of the country. There and then, a call was put across to Jonathan by someone who has an axe to grind with the former Delta State governor.

Before you could say Jack Robison, Jonathan came roaring at Ibori on phone like a ravenous wolf. He pounced on him like a weightlifter on a scrawny thief; gnawing on him still as would a junk-yard dog weighing on a moist bone, saying: "i will deal with you once i become the president of this country". The rest is now history.

The president also dealt a vindictive blow on the former governor of Bayelsa State, Mr. Timipreye Silver who he used and dumped after his presidential election. He abandoned Silver as if he were leprosy stricken and strike him with the broadsword of EFCC for allegedly standing on his presidential part earlier at the twilight of President Yar' Adua's health's crisis. The President came across as a man whose idea of fighting corruption betrayed the logic of institutional development. As such, the president has showed himself to be a wolf in sheep's clothing pretending to be a sheep wolf's clothing.

But the question on the lips of many is why has the President not deploy the same zeal, muster up the needed courage to bring to justice the known criminals in his government who are also member of his party, the PDP, and the suitcase oil portfolios without storage tanks and depots for the imported petroleum products? Why has he not fixed the nation's 4 refineries? How much does it cost to build modular refinery? How much has his administration pay out as subsidy claims? The president has demonstrated once again that he is a criminal-pleaser who prefers leading from behind with absolute greenness.

It speaks more of a hopelessly incompetent administration harped on hearsay without cohesion of any sort to vitiate or mitigate the amalgam of crises plaguing the nation. Instead of grappling with the onerous task of superintending or building the nation in a state of virtual collapse in all front, the President has further dampened and dashed the aspirations of the populace who look unto him for succour and redemption. It's most saddening that a learneth Judge of Mr. Onwumi Martins standing would put bis foot in his mouth; running naked on the cactus patch on fire and pronounce a 14 days remand for the latter, when of course, investigation to the alleged subversion of subsidy fund has not been thoroughly investigated and concluded. Why arrest a man when you know that investigation into his alleged crime has not be concluded? Why remand a man when you know that there is no circumstantial evidence to prosecute him?

How will the Judge feel if it turns out that Capital Oil establishment was unjustly victimised in the jaundiced judgement that exposes the platitudinous servility of the Judge? What if it turns out in the end that Capital Oil management is a victim of President Jonathan's phobic stone walling and shadow chasing to divert attention from his ineffectual government and obvious inanity that has perverted and remained current in his administration? Supposed it's found out that the supposedly watchdog agency, EFCC, is prosecuting a proxy war against innocent and forward looking young entrepreneur magnate?

What if the balefully discredited outfit called the EFCC is solely engaged in overt sanctimoniousness to vounch-safe her out-size image that further blurs the war against corruption since the young man might have refused to "Play Ball"? What if it turns out that President Jonathan is indeed victimising the ineluctable young-star who has yet to see the PDP as a credible platform on which to prosecute his governorship ambition in 2013?

As the questions are legion so are the vagaries that have undone, threatened and even prevented the first set of alleged fuel subsidy fraudsters from being prosecuted. Are you surprise that Ahmadu Ali's son, Bamanga Tukur's son, Wale Tinubu of Ondo, Femi Otedola of AP and Zenon, Mike Adenuga of Conoil, Aliko Dangote of MRS, Mobil etc. have been variously rewarded with one federal contract after another, even after it was discovered through series of earth-shaken revelations that the lots have shortchange and pilfered the nation collective patrimony? Why Mr Uba alone in the amidst of these numerous economic criminals?

What has the management of Capital Oil and Gas done differently that has warranted making the organisation a scape goat in the midst of many? In his affidavit, the deponent alleged that Mr. ifeanyi Uba and senior company executives of Capital Oil and Gas Limited, fraudulently and with intention to defraud, obtain a total sum of N42. 291 billion from the Federal Government of Nigeria by falsely pretending that it imported and sold 538.7 million litres of petroleum during the 2011 fiscal year through 26 transactions.

For crying out loud, these transactions are local and international dealings with records to show when and where and the period they were transacted in the year under review. Central Bank of Nigeria, CBN, Audit firms are also part of the these transactions with records. Is it a rocket science to verify these facts from the CBN and other relevant agencies involved in fuel importation business to know weather or not Mr. Patrick Uba actually fleece the nation of her hard earned meagre resources?

Reality check has resonates! The president has been engaged in play-to-the-base politics in the East since the demise of Chief Odumegwu Ojukwu. This is in consonant with the PDP supposition that they will rule Nigeria forever. Any wonder that Mr. Patrick Ifeanyi Uba has been singled out for harassment? It has been one antagonism after another since Mr. Ifeanyi Uba indicated his interest to run for governorship seat of Anambra State on the platform of All Progressive Grand Alliance, APGA. Can someone please tell Mr. President to eschew politics of bitterness?