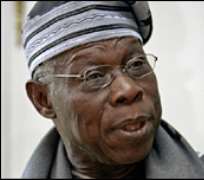 Nigeria's president has promised thousands more jobs and a new motorway for the oil-rich Niger Delta region.
Olusegun Obasanjo told officials from the troubled states that new jobs would be created in the military, police and the state oil company.

There has been an upsurge of violence in recent months in the Delta, which remains poor despite its oil wealth.

Attacks by militants on foreign oil interests there have cut the country's oil production by a quarter.

They have cost Nigeria millions of dollars of lost revenue and helped to drive up world oil prices.

Announcing the new jobs and a $1.8bn (£1bn) motorway project, President Obasanjo told state representatives that the meeting was "a wonderful opportunity for a new beginning".

He was addressing the first meeting of a council designed to speed development in the region.

But a spokesman for one of the militant groups said the president's announcement was "not exciting enough to compel a positive response".

Oronto Douglas, an activist mediating for the Movement for the Emancipation of the Niger Delta (Mend), told Reuters news agency that the struggle had gone "beyond just development".

In February, Mend kidnapped nine foreign workers in the region, but later released them all. The group has threatened further attacks on oil industry targets.

The militants, who say they are angered by poverty in the region, are seeking greater local control of the area's oil wealth.

The BBC's Alex Last in Lagos says the militants' grievances were not addressed at the meeting.

Although there have been promises of development in the past, few have become reality, he says.

The real test will be to see if this time the development will reach the communities who are in need, our correspondent says.