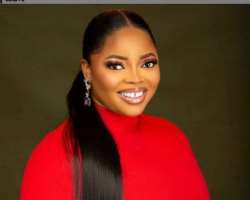 Popular Nollywood actress, Juliana Olayode in a latest video has lamented over her overpowering urge for sex.

In the video she described how her sexual urge becomes so uncontrollable that she finds it difficult to abstain from copulation.

The actress who is popular for her role in Jenifa Diary’s made this known in a post shared via her verified Instagram page.

She uttered that her body has been fighting against her and it’s almost as if she doesn’t know how her body functions again. She admitted that she is presently going through a lot as her body keeps demanding for intercourse.

The 27-year-old Juliana Olayode added that everything in her head is screaming intercourse and the way her body is doing she is thinking of getting married mainly so that she can have copulation with man.

“Your dearest sister has been going through a lot, and my body has been doing gish gish gish, fighting against me and it’s almost as if I don’t know my body again,” she said. It’s getting more difficult to abstain from sex. Oh My God I don’t know, everything in my head is screaming $ex $ex $ex and am like what?? The same pressure you go through, I go through, probably even worse”.

She confessed that her overpowering urge at one time made her think she was bewitched.

"I have never struggled sexually like I have these past few months. The temptations were HUGE!! AMBIGUOUS!!! 😂😂 I was almost thinking I was bewitched, I think say persin jazz me…🤣🤣.”