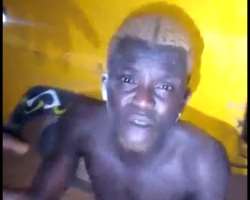 A video making round ms in the internet shows popular street hop star, Habeeb Okikiola aka Portable beaten by mob for stealing. The viral video captures moment he was beaten and stripped naked by the angry mob.

According to the witnesses in the background. He had boarded a tricycle and tried to steal the iPhones from the pocket of the passenger next to him.

Meanwhile at the time of this report, efforts to reach his manager to confirm the story was unproductive.

Fans have reacted to the viral video. Some question, if he was the real celebrity dancer? Or a lookalike