I am dating a 60-year-old man -- Nkechi Blessing boasts 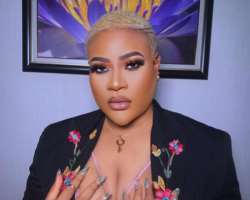 NBS as she is fondly called by fans seems to be the buzz setting the internet on fire. Just few hours, she repeated called off men due to financial status of any interested one who might have a crush on her.

This time around, the controversial actress has revealed that she is dating an 60- year old man. According to her, the man gives her so much peace and he’s not on social media”.

She made the disclosure in an Instagram live session with auto dealer, Chidi Mike; crossdresser, James Brown and actor Seun Jimoh.

This comes hours after her husband, Opeyemi Falegan went online to announce the end of their marriage.

The screen diva also said that she and the elderly man who is based in the United States, are planning to get married soon.

Sunday said he gives her peace of mind, and does not even have an Instagram account, so he doesn’t know what about the online drama between she and her estranged hubby, Opeyemi.