Late Justus Esiri, has taken a lot out of me--Dr. Sid 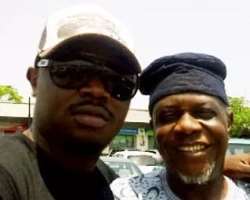 Today marks the third year anniversary of Nollywood actor Justus Esiri's death ?who happens to be the singer's father.

?He shared a photo of his late father and captioned it "You will always be remembered."
Recall that a few months after the passing of his father, Dr. Sid spoke to Urban Royale Magazine about the loss of his father.

According to him, "Losing my dad has taken a lot out of me, but it has given me a lot as well. I miss the man just for his sheer awesomeness. He was so great, always so composed, he had everything under control. He had a great smile, he had charisma, and he was so charming.

Everywhere he went into, he would light up the room. Those are qualities I try to imbibe in myself in my everyday life, in everything I do."