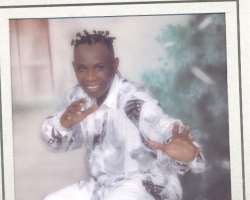 Vananga Ebitennga Wokoma a.k.a waterside president has hit the music industry with new hot singles to celebrate with the Valentine and the street life. The single tracks titled 'Love is Real' and 'Hustler' are already air borne and making waves on the radio stations in Rivers State. In a chat with entertainment correspondent, Precious Werner Ahiakwo, the Ogbongidi crooner reveals that he still believes in Love and the Street life that's why he's celebrating it in his lyrics. The gyration master also reveals that the tracks are hits in his fourth up coming album he will unleash before the end of 2010. However, the self acclaimed waterside president, recorded his first album titled ''Ogbongidi Exponent'' in 1996, a medley of festival songs which made waves then and brought him to lime light. The second album was titled ''Culture 2000'' and the third, “Identity”. The Rivers State born music icon is also calling on sponsors to support a TV series he did with Port-Harcourt own Nollywood star, Colombus, titled “Oloko Town”. “The story expresses the local vices of our communities. It's an open story that can be converted to series. NEPAD sponsored 3 episodes already and other episodes are ready for sponsorship”, he added.