UNIPORT RITUAL KILLING: FAILURE OF EDUCATIONAL AND POLITICAL LEADERSHIP - A CALL FOR EDUCATIONAL REVOLUTION IN NIGERIA 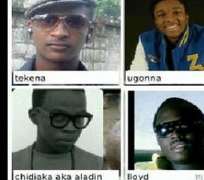 Paul Marshall, a Senior Fellow at the Hudson Institute's Center for Religious Freedom, New York, and the author and editor of more than twenty books on religion and politics, once a victim of his own rage, wrote, “We live in a world of cynicism, cruelty and corruption.”

Paul Marshall was right then and even now. No one can deny the fact that the values and standards of our society as a whole are rapidly declining - morally, ethically, socially, and above all spiritually – despite the abundance of Churches, Temples and places of worship in the country. The most culpable of this degradation are the young people.

Nigerian institutions of higher learning especially in the South-east and South-south regions have become centers of strikes, riots, prostitution, sexual harassment, rape, cultism and poor lecturers. The university campuses have also become haven for incompetence, corruption, cheating, conflict, violence, gang activity, rape, killings, and all manners of evil and atrocity – rather than institutions of higher learning and innovation.

And this is simply due to the massive failure of leadership in the education sector – where those who direct our educational ministries and institutions are simply corrupt, myopic, and visionless.

From 1999 till date, the South battled the scourge of broad day armed robbery, kidnapping, political assassinations, child trafficking, drugs peddlers, 419, ritualists, false and idolatrous religious shrines, satanic churches, and gang activities. It was the kidnapping of 15 young school children at Aba in 2011 that ignited the anger of most Nigerians that compelled the police and military personnel to work together to fight kidnapping, which was then a national opprobrium. Southeast and in fact most of Southern Nigeria was almost ungovernable because of the scourge of armed robbery in SE, political motivated killings in SW and kidnapping in SS. Theses atrocities coupled with corruption were clear indication of lawlessness and failed Nigerian state. Nowadays, it is factory babies located all over the Southeast and South-south.

Also last year, the vicious gang rape video at Abia State University made headlines around the world. Nigerians were angry and outraged and many including this writer called for educational reform offered ideas which will be reproduced in the later part of this piece. Today, it is the video of a barbaric killing of four university students at the University of Port Harcourt, Choba, Nigeria – going viral on the Internet.

The barbaric lynching and malicious murder of those four Uniport students at Omuokiri-Aluu community near Choba, Port Harcourt, is simply evil and satanic. This barbaric killing is an outrage. In fact, it should call for a revolution in educational sector in Nigeria. The manner in which those students were murdered underscores the sickening immorality of the present failure of educational leadership and culture of learning in Nigerian. This is clearly an evidence of a hopeless and purposeless university education in Nigeria today. The lynching video is a picture of insecurity and lawlessness in the university campuses in Nigeria today. These kinds of wicked and barbaric atrocities are also clear evidence of hopelessness, ignorance, unrighteousness, pervasion and poverty that pervades the land.

Rivers State, a recipient of huge oil revenue from the federal government should be able to setup a 21st century University environment with free learning materials and access to modern technology and social media facility for students to learn and compete globally. Instead this government as well as previous ones have been corrupt, myopic visionless and lack the approach to turn such a rich oil-rich State with enormous and diverse human potential into a 21-century first class State.

The killing of Uniport students is a failure of educational and political leadership as well as incompetent government. Robert M. Franklin, PhD., a public intellectual and president of Morehouse College in Atlanta, USA, in his book, “Crisis in the Village – Restoring Hope in African American Communities”, writes, “That three unique institutions that form the foundation of every society - the family, government, and Church are in serious crisis. He argued that the family, which is the bedrock and the moral fiber of every civil society and perhaps the most important of all, is in a crisis of commitment. The government has lost its social and economic purposes while the religious institution - the church has lost its moral and spiritual mission.

The perpetrator and sponsors of these vile, evil, and satanic killings should be punished severely - even with death penalty. I weep and bemoan Nigeria today.

Here are some ideas to address the crisis in the education sector and institutions of higher learning in Nigeria.

1. Parents, schools, educationists and policy makers must work together to transform the culture of purposeless educational system in Nigeria. The community must demand for equipped schools and quality education from their providers. Parents must rise up and demand for better, improved, and equipped schools as well as quality teachers. Parents must partner with schools and government to educate their young children and nurture the future leaders of Nigeria. I can still remember when villages contributed money to support a brilliant student, who has no means to attend school or university in Nigeria or overseas. We must return to community and parents involvement in providing education for the young people.

2. The home must become the first ethical learning and education center. In African traditions and cultures, children were taught their identity and moral obligations within the family household and extended family unit. Literacy and learning were treasured skills in early West African empires. The early West African nations were known for their political astuteness and intellectual ability and it all began at home. Today the strong traditions of teaching and learning that were present in early African empires that thrived have been replaced with quick rich programs. For the Jewish family, education began at home the moment the child is born. The ancient Greek philosophers also believed that ethical and philosophical instruction should begin at home when children are young.

3. Political leaders must enact education policies that benefit the young people and the community. Education policy makers must partner with businesses and government as well as international organizations to educate the young people. I read how the former Governor of old Imo State, the late Governor Sam Mbakwe visited his alma mater in USA and pleaded with the university for free books and educational materials for Imo State schools. He accomplished a lot in the area of education during his administration from 1979 and 1983 more than any of his successors. In fact no governor from the South East since 1983 has made any significant achievement compared in the area of education and higher learning like the late Chief Mbakwe. The current political leaders – especially those heading the education ministry must reach out and seek for assistance including international foundations, Diaspora organizations, etc., to transform the schools and institution of higher learning in their communities. The culture of corruption must stop. Vision and innovation must thrive again in Nigerian schools and universities.

5. The irresponsible laws and reprehensible actions of government and political leaders must stop. Government must encourage and seek private investment and partnership in education. Private centers of learning must be encouraged. There must be private initiatives and non-governmental agencies to overseer private schools and college operations. Competition and reward system must be encouraged by businesses and private education investors.

6. Education advocates and crusaders must be nurtured. These are practically non-existent in Nigeria today. The education enthusiasts must rise up and speak out.

7. Educational philanthropy must also be encouraged. Today, a typical Nigerian – especially from the South will give millions of Naira for nonsense titles, but will not give any kobo to philanthropy, schools, Scholarships or support the training of young people. Some Nigerians will give millions to receive accolades but will not genuinely give for the training and development of young people for leadership. That warped and morbid mentality of thinking must change.

8. In the past, school drop out due to poverty and peer pressure for quick rich beefcake business was not an option. It must be discouraged. Parents must again emphasize the importance of education and demand that their children get a quality and good education, which is a right and basic duty of the government – federal, state or local governments.