‘I AM CLOSER TO DBANJ AND NOT DON JAZZY’ – IKECHUKWU 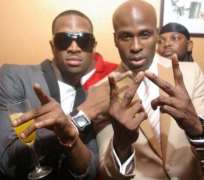 “I have heard a lot about my relationship with D'banj. Some people call me his houseboy, bouncer, and the rest, but let me say this, I have been close to D'banj since day one. The first time I saw him was at Obi Asika's house, when he was about signing to Storm Records…and if you're observant, you would have discovered that we have similar features; he's lepa just like me and we have same swagger. So we've created some kind of bond right from time which I was not opportuned to share with Don Jazzy. I only find people that find me, simple! Those that I am important to are those that are important to me. I am just chilling with D'banj and now that he's making a stand abroad, it's going to be stupid of me not to utilize the situation he already has. So, we are not just friends, we are also doing business” – The rapper tells Encomium magazine in an exclusive interview