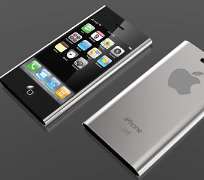 Apple Inc's new iPhone goes on sale on Friday with a bigger screen and 4G wireless technology, as the company seeks to safeguard its edge over rivals like Samsung Electronics Co Ltd and Google Inc.

The iPhone 5 fulfilled many of the expectations laid out by gadget geeks and technology analysts ahead of its Wednesday unveiling but offered few surprises to give Apple shares -- already near record highs -- another major kick.

"There is not a wow factor because everything you saw today is evolutionary. I do think they did enough to satisfy," said Michael Yoshikami, chief executive of wealth management company Destination Wealth Management.

Other industry analysts speculated about what else was in Apple's product pipeline ahead of the crucial year-end holiday season, especially since the company stayed mum about an oft-rumored TV device or a smaller iPad.

The consumer electronics giant that in 2010 popularized tablet computing with the iPad has given no hints on whether it plans a smaller version to match cheaper tablets from the likes of Google or Amazon.com Inc.

"We would really like to see the iPad Mini in the product offering for the all-important holiday quarter. They still have time," said Channing Smith, co-manager of the Capital Advisors Growth Fund. "As soon as we see that, we will have more conviction about the stock heading into the final quarter."

The latest iPhone comes as Apple faces competition beyond current key competitors Samsung and Google. Late entrant Microsoft Corp is now trying to push its Windows Phone 8 operating system as an alternative to Apple and Android, the most-used smartphone operating system in the world.

Analysts have forecast sales of 10 million to 12 million of the new iPhones in this month alone.

Apple Chief Executive Tim Cook kicked off the event in San Francisco's Yerba Buena Center but it was marketing chief Phil Schiller who introduced the iPhone 5 and took the audience through the new phone's features.

The iPhone 5 sports a 4-inch "retina" display, can surf a high-speed 4G LTE wireless network, and is 20 percent lighter than the previous iPhone 4S.

CEDING A LEAD
It ships September 21 in the United States, Australia, Canada, France, Germany, Hong Kong, Japan, Singapore and Britain. It will hit 100 countries by year's end in the fastest international rollout for an iPhone so far.

The stakes are high with the iPhone, Apple's marque product, accounting for nearly half its revenue. The California company has sold more than 243 million iPhones since 2007, when the device ushered in the current applications ecosystem model.

But Samsung now leads the smartphone market with a 32.6 percent share followed by Apple with 17 percent, according to market research firm IDC. Both saw shipments rise compared to a year ago, with Samsung riding its flagship Galaxy S III phone.

Available for pre-order on Friday starting from $199 with a data plan, the iPhone 5 comes with Apple's newest "A6" processor, which executives said runs twice as fast as the previous generation. It will pack three microphones -- enhancing built-in voice assistant Siri -- and an 8 megapixel camera that can take panoramic views.

It will hitch a ride on the three largest U.S. carriers: Verizon Wireless, AT&T Inc, and Sprint.

One popular enhancement was improved battery endurance -- the iPhone 5 can support eight hours of 4G Web browsing, the company said.

While Apple played catch-up on many of the new phone's features -- Samsung and Google's Motorola already have larger and 4G-ready phones -- analysts say the device's attraction is the way its software and hardware work in tandem.

"Where they are pushing the envelope, and where they remain the one to beat, is on the experience those features bring to the consumer," said Carolina Milanesi, Gartner Research analyst. "While other vendors continue to focus just on the hardware -- delivering the speeds and feeds and bigger batteries -- Apple focuses on pulling the operating system, the hardware and what you can consume on the hardware."

FOO FIGHTERS ROCK
Cook began the event by giving updated metrics on the company's products and then quickly gave up the stage for Schiller to introduce the iPhone 5.

The team then moved on to a new lineup of iPods, a redesigned iTunes store and ended with a surprise performance by rock band Foo Fighters. Apple executives in the front row could be seen rocking their heads to "Times Like These" and other hits.

For the iPhone 5, Apple has done away with the connectors used on previous devices and replaced them with a smaller and more efficient "Lightning" connector.

With the iPhone, it is shipping new "EarPods" audiophones, designed after digitally scanning hundreds of ears. Shares in Skullcandy, which specializes in stylized earphones, fell 4.5 percent on Wednesday.

Beyond hardware, Apple telegraphed many of the software changes to expect in iPhone 5 when it debuted iOS 6, its latest mobile operating system, in June.

Upgrades to the software include voice navigation for driving, a feature already available on many Android smartphones, as well as "Passbook" for storing electronic boarding passes, sports tickets and gift cards.

Siri has been improved. In an onstage demonstration, Siri was able to answer questions about the result of a recent pro football game and recite a list of movies playing around town, along with ratings.

Earlier, Cook told the audience that its apps store now has more than 700,000 on tap -- the industry's largest library.

"When you look at each of these, they are incredible industry-leading innovations by themselves. But what sets them apart, and what places Apple way out in front of the competition, is how they work so well together," Cook said toward the end of the two-hour presentation.