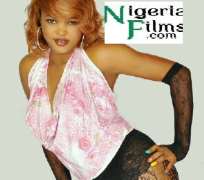 Nollywood actress, Colette Orji today, Friday, August 10, 2012 adds another year. The sexy script interpreter is well known for acting in epic movies. Her character interpretation is what wonder many, who see her as the next big thing in Nollywood.

Asides being a good actress, she also has the beauty and sexiness to accompany her acting skills, which are the necessary tools in surviving the very competitive movie industry in Nigeria.

Meanwhile, Colette has released some daring and eye-catching pictures. A source close to the actress confidently revealed to Nollywoodgists.com that Colette is presently out of the country for a movie shoot.

We learnt that the beautiful actress has now become a hot cake in Nollywood as many movie producers now fight to have her in their films. Sources also disclosed that Colette has been shuttling between many movie locations since 2012 before she jetted out of Nigeria for some movie jobs out the country.