UNTANGLING TUNDE BAKARE AND THE PRESIDENT 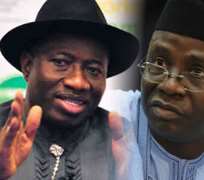 He rankles the security apparatus this time. That is the Save Nigeria Group, SNG, leader, Pastor Tunde Bakare. It has to do with what he said that some people overheard. So he was invited to have a chat with the State Security Service, SSS. It was a chat. Yes, a chart and no more than that because it lasted for one hour and ten minutes, and the pastor had walked away smiling. Gone may be the days you report to these guys in the intelligence business and return with broken bones. Anyone disagrees?

Alright, what was that Bakare said? “How to change government peacefully and make society better’’ No, it was not what he said. It was the title of every other thing he said. SSS boys had a cold after African Independent Television, AIT, reported its own version of that. It is the business of SSS to develop a cold when anyone’s words come with that tone. In order to be sure they heard him right, Bakare was invited to explain what he said from the pulpit of the church where he is the Overseer. It was a case of playing safe for the security boys, because the title sounds like something for a lecture, not a sermon. And so it was when the pages were opened.

“Mr. President may be doing his best but the impact is not felt anywhere except in the bank accounts of oil vultures, his corrupt political allies and corporate cowboys,” Bakare had said. And he continued. “We have a patriotic duty to educate our people and we will continue to do that until light replaces the darkness in foggy minds, since education is considered a better safeguard of liberty than a standing army.” Yes. Lecture. Not a sermon. He went on to state that: “the catalogue of scandalous mismanagement of national resources, the unbridled stealing of public funds, and the bewildering exposure of the level of corruption in almost every arm of government as well as governmental agencies and parastatals, call for a change of guards” Later, Bakare would talk on AIT. His fear, he stated, is not in any other thing but in the poor man who carries placard to protest on the street, because poverty would not let him sleep, and as for the wealthy, the fact that the poor is awake keeps him awake, too. This state of the country makes him fear that the nation is on the brink. And he had gone ahead to mention that since a president finds himself in power, not because he had prepared to be in power, but because a predecessor prepared the ground such that he found himself in power, then such a president should resign if the weight of the problem is too much for him to bear.

The debate may take off from here. Yes, Bakare’s view on the unenviable state of the nation are valid, but there is something simplistic, not simple, in the solution he has proffered to solving the problem. African leaders don’t leave, not even when their terms are up. That is one. One upon a time, an ill-disposed leader here didn’t leave even though the nation was on the brink as a result of inaction. From that perspective, Bakare has only made a proposal, he proposed a theory, which, with his level of understanding of the African mentality he knows no sitting president would heed. And if those security boys have had any other serious business to do, they would not have bothered to invite the SNG leader in the first place.

Back to other issues. Bakare referred to the few that grow fat, benefitting from the system, and from whatever positive efforts the president has made in behalf of citizens. That means he recognizes that the president is not solely responsible for the travails of the nation. Credit. It all makes his view a balanced one. But that is the crux of this piece is. Before one goes ahead, and because Nigeria is doing something at the moment to its constitution while a nation such as Israel is trying to write a constitution for the first time since it declared itself a nation some sixty years ago, moving this debate forward makes it useful to quote from what a writer published in The Economist. “At a deeper level, however, it is the political system itself that is chronically dysfunctional. When Israel was a newborn country fighting for survival, it had no time to devise an appropriate political model, so it went for pure proportional representation, practised almost nowhere else in the world.” And about this, another writer said, “This system has been depleting Israel's political energies for decades: it radicalised the territorial debate, debilitated the economy, obstructed long-term planning, derailed government action, distracted cabinets, diverted budgets, weakened prime ministers, destabilised governments, enabled anonymous and often incompetent people to achieve positions of great influence and responsibility and blurred the distinctions between the executive and legislative branches of government. Perhaps most crucially, it has led talented, accomplished, moral and charismatic people to abandon the political arena to the mediocre, unimaginative and uncharismatic people who currently populate it.”


Chickens roost everywhere. There is no point emphasizing that the latter writer meant, rather than putting pen to paper, documenting salient issues in a constitution for Israel, the problem with the nation is a systemic one and it should be so tackled. Now, the question can be asked, considering the state of the nation before 1999, the state of the nation since 1999, would the resignation of one man resolve the myriads of problems overnight? The blame stops at the table of the man on top of it all at the end of the day, but does one resignation automatically changes the nation? There is no doubt that a huge chunk of the blame for the unenviable condition of this nation lies with the leadership. That is demonstrated by the fact that a few individuals have been in position and have, in their little corners, demonstration how much things can be moved forward when the head insists that “business can not be as usual. One would admit that situation concerning corruption in this nation, for instance, has got to the level where ‘shock’ is the only way to describe how much lack of action has attended the scandalous revelations.

Even when investigation is said to have been concluded and people who collected fuel subsidy fund without importing fuel were in court, the Attorney-General of the Federation made Nigerians conclude that the government might have engaged in wuruwuru in order to scuttle court cases when he did not show up in court on the first day of hearing, and would not send a representative. That, after playing around for months with the report of the hearing lawmakers had conducted on the same issue. However, the system – political and economic - in this nation is such that it would take a total overhauling to help a new president see his way through the myriad of problems, even if every president resigns his appointment. The reason is that neglect over the years has led to the collapse of institutions, and institutional independence. In the event, there are in place leaders and institutional keepers that are worse than the man at the very top. This is one reason it is better to focus on institutions in this country when it comes to getting things turned around, rather than a man whose tenure would end in four years. Take, for instance, the appearance in court of the government with suspects in the fuel subsidy scam. It took the president sitting with some big wigs, talking of a multi-sectoral battle against corruption before anything could happen. Suspects were brought to court barely two weeks after the meeting. Yet, the reports had been with the appropriate anti-graft agencies for months. The simple conclusion is that these agencies with all the power they derive from the constitution to go after corrupt officials only waited long enough to check out the body language of the presidency before they took action. That has to be the case with kind of culprits involved. Even the son of the chairman of the ruling party makes the list.

And there are situations when no one waits for the presidency, Rather, officials in charge of institutions are settled, and others simply sit down and watch, leaving their tasks untouched. Lately, the leadership of the National Assembly becomes so concerned that it suggests coming up with a law that would state the punishment for any government officials who fails to implement the provisions in the statutory obligations of his office. These officials have their statutory books, they are pressured to do otherwise rather than implement, but no one sanctions them. It is what gives officials who approve subsidy fund for fuel importers to be so bold as to dash oil marketers money running into billions of naira when no fuel has been imported. There is the manner officials get appointed to offices, too. Political patronage which sees men with deep pockets paying for posts for their cronies. These are known practices. And in the end, what the nation gets is the kind of situation Bakare referred to.

The point here is this: In order to move the nation forward from the stagnated position it has found itself, the solution is not in the individual that has found the weight of a systemic problem thrust on him, but in, collectively ensuring that institutions, and the individuals who man them are empowered, set free such that officials carry out their duty as stipulated by law. One may want to urge lawmakers on with their bill on how to sanction officials who leave their statutory obligations unattended. In addition, forces with alternative views may continue to work such that the system is tidied up, the political process sanitized such that credible and capable individuals emerge on the political space. Added to this, the opposition will have to continue to work hard and ensure it throws out at the polls any leader it feels is a non-performer. The opposition wouldn’t have benefited from the vacancy, if the current president resigned rather than be eased out after an election, would it?