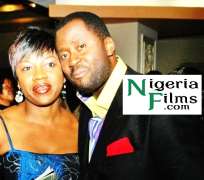 In his explanation on how he met his wife, he said it was her beauty first that first created that attention before he later discovered other attributes which are, God fearing, not too flashy, humble etc.

``I wasn't thinking 'wife' when I met her then because we dated like eight years before coming into marriage. As we became closer, I just fell in love and when it comes to love, you do not tell your heart who to love, so it was the fact that I love her and it's even sweeter now because we have grown better and we understand each other. Only that she likes money a lot more than I used to think she liked money,`` Desmond said. Nigerians Lambast Ghanaian Actress Kafui Danku For Investing In A Car Worth $ 90,000