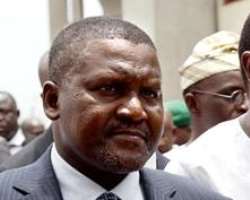 Aliko Dangote and Femi Otedola: when the going was good…
Listen to article

The duel of the Oligarchs reached a denouement Thursday, April 16, 2009 when the Securities and Exchange Commission (SEC), absolved Alhaji Aliko Dangote of any wrong-doing over the recent shares scam that pitted him against his erstwhile friend and business mogul, Mr. Femi Otedola; with the latter accusing the former of colluding with Lagos stock broking firm, Nova Finance and Securities Ltd and its Managing Director, Mr. Eugene Anenih, to perpetrate the fraud.

Following a meeting with the stakeholders - AP Plc, Nova, Dangote, Nigerian Stock Exchange, Central Securities Clearing System Ltd (CSCS) and Afribank Registrars Ltd, the SEC said in a statement Thursday that: “Nova Finance and its managing director employed manipulative and deceptive devices and contrivances in its transactions on AP Plc shares between February 11 and March 20, 2009 contrary to rule 110(1) (d) of the Rules and Regulations of the Commission,” adding that: “Nova Finance and its managing director manipulated the market by engaging in transactions, which had the effects of lowering the price of AP shares on the Nigerian Stock Exchange, contrary to Section 106 of the ISA 2007.”

The statement signed by its Media Head, Mr. Lanre Oloyi suspended Nova from all capital market activities for one year, with effect from April 16, 2009. Besides, Nova and its Managing Director, Eugene Anenih were fined N190,000, - N5,000 per day for 38 days - for violating Rule 177 and the code of conduct for market operators. Anenih has also been disqualified from being employed in any arm of the securities industry for five years, until April 16, 2014. In addition, he has been referred to the Economic and Financial Crimes Commission (EFCC) for further investigation and possible prosecution.

Although the SEC report acknowledged that “the managing director of Nova Finance had, within the period of eight weeks, consistently consummated cross-deals involving 50,000 units of AP shares per transaction between its company and Dangote's accounts,” it concluded that it "did not find any evidence" to show that Dangote, a client of Nova, instructed the stock broking firm and its Managing Director, Anenih "to carry out any of the transactions in AP Plc, purportedly done on his behalf."

However, anomalies fortify the doubt that greeted the SEC final report. Close sources to Otedola told Huhuonline.com that Dangote played hardball and muzzled Anenih to retract earlier statements he had made to the SEC. Anenih, according to the SEC report claimed that he got oral mandate through telephone calls from Dangote to effect the transactions. But Dangote's representative, told the SEC neither Dangote nor any one acting on his behalf have any recollection of such conversations, arguing that Dangote, did not, at anytime, give any mandate to Nova to carry out the transactions.

Following this rebuttal, Anenih retracted his earlier statement that he received Alhaji Dangote's mandate to carry out the transactions. “The managing director of Nova Finance agreed that he did not have any mandate from Alhaji Aliko Dangote to carry out those transactions, contrary to Sections 98 and 99 of the Investments and Securities Act (ISA) 2007 and Rules 100(4) and 177 of the Commission's Rules and Regulations, which required all capital market operators to maintain proper and adequate records of transactions,” the SEC report said. The unexplained volte face by Eugene Anenih has prompted speculation of foul play by Dangote. Sources close to Anenih who elected anonymity told Huhuonline.com that Anenih has just been made to pay the price as a scapegoat.

Little wonder, Otedola's supporters dismissed Eugene Anenih's roundabout turn and mea culpas as tele-guided by Dangote, saying the SEC should have subpoena Anenih's phone records as part of the investigation of Dangote's involvement in the share scam. They dismissed the SEC verdict absolving Dangote of wrong doing as a slap on the wrist, and wondered why the SEC found nothing wrong with the apparent conflict of interest involving Nova and Dangote (who also doubles as the NSE vice-president), besides, advising the NSE to “review its rules and procedures for appointing or electing its council members in order to ensure good corporate governance and avoid conflict of interest situations”.

If anyone had thought the bitter rivalry between the two tycoons will be over, then think again. The AP Plc shares scam cost Otedola an estimated $700 million. Otedola; hitherto Nigeria's only other billionaire in the Forbes list, has seen his net worth dropped from $1.2 billion to $500. Aliko Dangote is now the only Nigerian in this prestigious billionaires club. Huhuonline.com has learnt that Otedola has vowed to exact his revenge, blaming Dangote for the breaking a gentleman's agreement that claimed AP shareholders as victims, including Otedola himself. This potential clash of egos; what Forbes magazine qualified as a "settlement of personal scores" between the former friends has set the stage for the next chapter in the unfolding saga.