Top Model of Colour finale in The Gambia 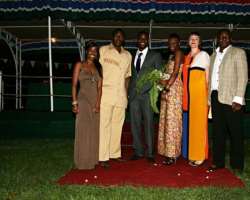 The panel 4
Listen to article

Models from across the UK including London, Birmingham and Manchester flew into The Gambia for the show in addition to a state house visit and meeting with the President of The Gambia, Yahya AJJ Jammeh and photoshoots in choice locations around The Gambia's capital of Banjul.

The evening culminated saw Emmanuel Ogunjinmi and Paula Okunzuwa walk away with the titles of Top Male and Female models of colour after having been judging on a range of abilities including runway walk, physique and understanding of the modelling industry. Industry experts on the judging panel included Arise editor Helen Jennings, leading British fashion entrepreneur Samata Angel and Yemi Adegite, CEO of Glasgow Fashion Week.

Judges for the different heats of the competition, which ran for months up to the finale in Gambia had included international makeup artist Eryca Freemantle, AFUA Acheampong, the acting editor of Black Hair Magazine, who both joined the troupe travelling to The Gambia and top Nigerian model Ibukun Jegede. The winners secured a contract with Mahogany Models which is sure to provide a launch pad for their respective careers within the modelling world. The competition also saw both commercial models and high fashion models given the opportunity to compete on an equal footing, assessing their potential within respective industries. Sola Oyabede, the founder of Mahogany Models and the Top Model of Colour competition is an influential figure within the British modelling industry and has worked tirelessly to secure a place for models of colour within the modelling industry.