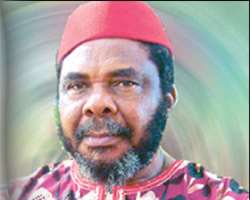 Veteran Nigerian actor, Chief Pete Edochie who was kidnapped on Sunday at Onitsha in Anambra State has regained his freedom.

Daily Sun gathered that Edochie was released on Monday evening by his kidnappers at about 8.p.m, within the Awkuzu axis of the state, and was immediately driven straight to the Government House, Awka, to the warm embrace of the governor, his family members and other top government officials.

Confirming the good news, Barrister Iyke Ezenagu, the Anambra State chapter chairman of the Actors Guild of Nigeria (AGN), who played an active role in Edochie's release, insisted no ransom was paid to the kidnappers.

He however, maintained that the joint efforts of the state government, police, AGN, Edochie's family and the fact that Edochie is a popular actor in Nigeria, all contributed to his quick release and non-payment of ransom to the kidnappers.“

We are all happy that Chief Pete Edochie has finally regained his freedom. In fact, my happiness knows no bound. We also want to immensely thank all those that supported us in ensuring that Chief regained his freedom this soon without any harm. What this means is that Anambra is still safe for movie people or anybody to come and do business or live in. We thank God for everything.”

Also reacting, Mr. Ejike Asiegbu, the national president of AGN, said Edochie's freedom was the triumph of good and popularity over evil. He further warned kidnappers to henceforth, desist from kidnapping or terrorizing Nigerian actors and entertainers.

Edochie who was celebrating with friends and well wishers told Daily Sun at his Independence Layout residence in Enugu yesterday that he was grateful to God for making him experience the abduction first hand.

Unlike most other kidnap victims who paid heavy ransom to secure their freedom, Pete Edochie said he paid no dime and did not lose anything, not even his mobile phone set.

He said he did not know where he was taken to or even the point he was dropped. “All I know is that I was able to pick a cab that took me to a hotel in Awka.”

“And somehow, that they have managed to hear a lot about me that I am very good to people. That I assist people particularly the downtrodden; That they know all that and you so would not hurt me. I mean they didn't tie their faces. Nothing. They were discussing with me.

“They bought me some drinks, made sure I did not get alcoholically dry. You know as an individual, if you find yourself in a situation like that under siege, you complicate your situation if you experience internal alcoholic drought. So, by the grace of God they were lubricating my system for me and at the same time encouraging me to feel the pulse of their heartbeat.

“If the government can put in place a machinery to guarantee that the youngsters who are unemployed and the young girls who are unanchored are entitled to what in America is regarded as social security and in Britain is called the dough; but at least at the end of each week they will have something in their pocket. There are things that are fundamental to survival of every individual.”

Recalling how he was abducted at gunpoint on Sunday, the popular actor said: “We were coming from Onitsha Ukwu, you know my primary assignment now is taking the film of Rev. Father Tansi round the Catholic churches in the country. When we got to Nkpor junction, around Obosi or so, a bus just came double crossed us and asked all of us to come down and get into the bus. We did. And that was where the captivity started. The young men who are my assistants were all released and they held me.

“But I think they wanted me to see what they experience and they treated me with a lot of respect, a lot of reverence. They loved me a lot and they said as far as I am concerned I am their father. That they are not happy doing what they are doing but that they are compelled by circumstances to do that. They believe that the ostentatious life of politicians has inflicted a lot of harshness on their own circumstance as individuals and they think it's about time they too get their own slice of the national cake. It's unfortunate that they have to do it the way they are doing it but that they don't have options.”

“Our prayer is that this ugly event should not happen in Nollywood again. These kidnappers should leave us alone. Are they not happy that we are the ones still entertaining and making Nigerians happy in the face of the numerous national challenges confronting us daily as a nation? On behalf of AGN, we want to thank God and all those that assisted us in securing the release of our great actor and veteran of veterans, Chief Pete Edochie.

“God bless all of us. And to Pete, we say a very big welcome.”

While reacting, the Managing Director of O'Jez, the popular Nollywood centre, which had also hosted Edochie in the past, Mr. Anayo Odobeatu, called on the State and Federal governments to immediately address the worrisome security situation, in Anambra State. He also congratulated Edochie and further advised him to take a well-deserved rest.

The kidnappers had earlier demanded a ransom of N50 Million which was later negotiated down to N10 Million as at Monday morning.

He further said that the hoodlums had to take to their heels when they got wind of the presence of men and officers of the command.

However, the command has commenced man hunt for the suspected kidnappers which according to Amakulor, was already yielding positive results.

The police commissioner also said signals had been sent across the neighbouring states to Anambra while the respective state police commands were on the trail of the hoodlums.

Amakulor assured residents of the state to go about their lawful duties without any fear as the command had taken proactive measures at stemming incidents of violent crime in the state.