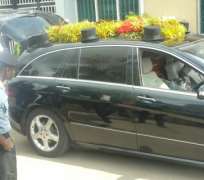 Students of University of Lagos [UNILAG] continued their resistance to the name change announced by President Goodluck Jonathan on May 29th 2012. The university was renamed Moshood Abiola University of Lagos [MAULAG] by official fiat during a national broadcast marking the ruling party's "Democracy Day" but today student's of the institution defied security operatives and an official closure order announced by the authorities yesterday.

The students directed the convoy taking their late Vice Chancellor Shofoluwe's body to take over the Herbert Macaulay way, and they occupied it until the train slowly reached the All Saints Church Yaba venue of the funeral service while the funeral service went on in the Church the students continued their protest against their university name change by President Jonathan.