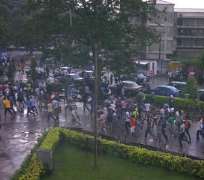 LAGOS, May 29, (THEWILL) - Earlier today, President Goodluck Jonathan had in a national broadcast announced the renaming of University of Lagos (UNILAG) after Chief Moshood Abiola for his contribution to democracy in Nigeria.

Shortly after the broadcast, students began gathering in groups in the main campus at Akoka, Lagos in anger over the sudden name change.

They subsequently trooped out of their hostels on to the streets chanting protests songs and denouncing the change of the institution’s name.

Access roads to the institution were blocked causing disruption in traffic on University of Lagos Road and St. Finbarrs’ College Road in Lagos.

Witnesses say officials the institution came out to beg the students to go back to campus saying, “We are with you.” Students shouted “NO”.