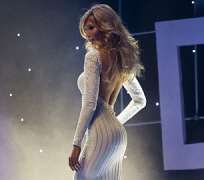 She was born a man 23 years ago (1989) and after undergoing sex change surgery at 19, 4 years ago-2008, she is now a delectable woman. She seems to have now taken the world by storm. Jenna Talackova was one out of the 62 women that competed for a beauty crown lastnite- Miss Universe Canada.

At 6'1'' she towers above many of the other contestants. The trans-gender, that's what they are called, had caused a lot of uproar, when she was at first discovered and was sent packing, but she sued and was later re-instated.