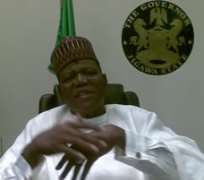 Gov. Lamido
Governor Sule Lamido of Jigawa State has challenged the National Security Adviser, NSA, General Andrew Azazi, to name the sponsors of Boko Haram, within the ruling Peoples Democratic Party, PDP, since by his (NSA) own admission, PDP is Boko Haram.

Speaking in an exclusive interview with Daily Sun in Dutse, the Jigawa State capital on Sunday afternoon, Lamido, who said, though he believes and trusts the President, when he distanced himself from the NSA's comment, he was, however, quick to say that 'but then Nigeria will not trust us now, going by the NSA's statement.'

He said further that 'And if you know what is called leadership, then you will know that the NSA's statement has taken the moral authority of the PDP to rule Nigeria again. This is my worry. So we must do something drastic to refute it in the most unequivocal way, to show that what he said was a lie,' adding that 'Even though the President has tried to distance himself from Azazi, the NSA, you can't distance yourself from yourself, because the NSA is the shadow of the PDP, how can you distance yourself from your own shadow? There is no way we can distance him from the PDP, because he is part of us. But we have no idea that within us, we have someone who has been sponsoring Boko Haram, we have no idea. So something must be done, to restore the trust and confidence of Nigerians on our government. This is very important and it must be done soon. The Nigerian government must come out very, very clear to assure Nigerians that we have the capacity and the commitment and the will to protect their lives, as a government which they have voted for.' Excerpts:

How do you feel being labelled sponsors of Boko Haram by the NSA?

Well, to be honest, being a loyal party member, I feel incinerated by the eruption of the NSA about the party. And since then, frankly speaking, I have been traumatised. I have also made contacts, because between the time I heard it over the BBC, Hausa Service, in the morning on Saturday, and now, I have received over 100 phone calls. And the calls were in two parts, the first part is from PDP members, who are very loyal to the party, and who are disturbed by the eruption. And of course the other part, from the opponents, who are saying 'it serves you right,' deriding me and abusing me, saying that, at last, 'the truth has come out, that PDP is Boko Haram.'

I also tried to make some phone calls to reach people in various positions, I made contacts with anybody you can think of in authority, I mean at the level of government, and even the party, including some elders in the party, nation-wide. And the feedback I got was that everyone was traumatised by that eruption. Everybody was worried, for the simple fact that the PDP, which was elected by the Nigerian people, whose primary role as a government is the preservation and protection of lives and then anything else, is now the very party which is now killing Nigerians. It is the very government which is now killing Nigerians, as attested to by the NSA for whatever reason. Whether taken in context or out of the context, this is the general conclusion that people have drawn.

And two, is that the President, equally nominated by the PDP, is also Boko Haram and it is this same President, who appointed the NSA. So you could see the pain in us. The NSA, who is supposed to help the President, in securing Nigeria and lives of Nigerians by his statement implicating the president in the crisis. So, today in Nigeria, going by the NSA's analysis, we are running with the deer, and hunting with the hare. I say so because, the NSA was even very conclusive by saying that even if the entire Boko Haram leadership was wiped out, the problem will persist, simply because the party (PDP) is in power. So by implication, what he is saying is that until PDP is swept out of power, Nigeria will never be safe.

What do you think may have possibly prompted the NSA to make such a statement?

I don't know what might have been the heat, because the thing was just like a volcanic eruption. I don't know what might have been the intensity of the heat underground, to warrant that kind of comment. Certainly I am PDP 100 percent, but a lot of us were really shocked, like I said earlier, we all felt incinerated by the eruption. We were almost burnt out. And unless we take a drastic action, I can't imagine PDP ever winning election again in Nigeria. How can you form a political party, to form a government that will now be killing Nigerians? In fact, it is not about the PDP now; every sane Nigerian should feel concerned about the implication of the NSA's eruption, because the issue of security is beyond political boundaries. All along, in the last one year we have been grappling with the vituperations from our political opponents that you know 'the federal government has no capacity, has no bla, bla, bla.' Only for the NSA now to come and validate what they have been saying, by saying 'yes, indeed, the FG is behind Boko Haram. It is the same government killing Nigerians.' And I find it really, really sad and unfortunate. And unless something drastic is done, something which will convince Nigerians that the FG is serious, it will be difficult to win confidence, because the person who is advising on security is the one telling Nigerians that 'sorry, you are insecure under the PDP, and so long it is this government controlled by the PDP, you are all dead.' I say so because by his own admission, nor matter what is done in terms of tackling

Like I told you, I have been making contacts since I heard it on the BBC, I shouldn't have come out to talk, but then you see, the issue is already in the public domain, so certainly something must be done. Because like I told, I have spoken to quite a number of people in government and within the party, it is the same feeling of outrage. Because, what do we tell Nigerians, when the man who is in charge of advising the President on how to secure Nigerians, is the one telling Nigerians that 'I am sorry, you're in for it, because the party in government is the one sponsoring Boko Haram.

Before the 2011, there was an attempt by some Nigerians, especially from the north, both within your party and outside it, to stop President Jonathan from running.

You were one of those you played a major role in ensuring that party members followed party's decision to elect Jonathan as a Presidential candidate, how do you feel now considering what the NSA has said?

Look, in political management, leadership and campaign, people have the right to take their own positions, to like or dislike a position; it is not a crime to dislike our own candidate. So I don't think the positions taken within the party by the members then, has any relevance in the issue at hand. Because Nigerians, whether from the South or North are free to pick Presidential candidate of their own choice. It is not a crime. If there are people in the north who never liked him (Jonathan), there were also people in the South, who never liked him. There are also people in the North, who never liked Buhari, just as there were people in the South, who liked Buhari. So it is not the issue now, because politics is over. We are talking of a serious security issue, that concerns everyone, issue about lives. There can only be government, when people are living, so don't get the issues mix…

So, what next?
Well, we are waiting. It is not enough for the President to say it is not his own opinion. It is not enough, because it is something grievously serious. So we are waiting. I mean, what do we tell Nigerians, I am not talking about the North or South, I am talking about Nigerians. If the government cannot secure their lives, it means they are finished. That is my worry. And the bigger worry is that it is coming from a particular area, where all the who -is -who in the PDP was there when the statement was made, and none of them contested it. So it was an assemblage of Boko Haram, who came to expose themselves, because they are all PDP. PDP Enugu is the same with PDP Kano, and vice versa. So if the PDP is Boko Haram, then the assemblage in the South-South, where the comment was made, was that of a Boko Haram, and as God will have it, they some how leaked what we are, that is what they are saying.

Finally, why is it that Boko Haram insurgence appears to have defied all known solutions?

You see, we are in a kind of evolution of our lives. The cries today of poverty, hunger and disease are all part of the failures of the last 25 to 35 years, which have now fully mature into a crisis. But people need to be given hope. And we are trying very hard to do that because I don't think it is beyond our capacity to secure Nigeria. But then Nigeria will not trust us now, going by the NSA's statement. This is the implication. Even though the President has tried to distance himself from Azazi, the NSA, you can't distance yourself from yourself, because the NSA is the shadow of the PDP, how can you distance yourself from your own shadow? There is no way we can distance him from the PDP, because he is part of us. But we have no idea that within us, we have someone who has been sponsoring Boko Haram, we have no idea. So something must be done, to restore the trust and confidence of Nigerians on our government. This is very important and it must be done soon. Nigeria government must come out very, very clear to assure Nigerians that we have the capacity and the commitment and the will to protect their lives, as a government which they have voted for.