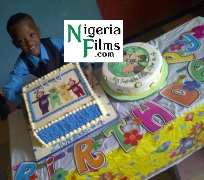 Zion is the one of the two children from Sumbo Ajaba, one of 2Face's three babymamas for 2Face Idibia.

The Nigerian music star on February 14, 2012 proposed to Annie Macaulay, one of his babaymamas who has a daughter for him, Isabella.

Few months ago, the third babymama, Pero Adeniyi welcomed 2Face's sixth child and the third for her for the African Queen crooner.