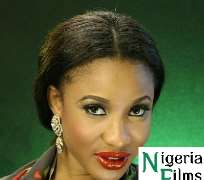 A national newspaper reported over the weekend that a movie producer has threatened to arrest Nollywood actress, Tonto Dikeh with police if she doesn't show up for an abandoned movie production in Asaba, Delta State.

The news had it that Tonto left the movie production on the excuse of travelling to Lagos last week Monday but was on another movie shoot.

She was reported to have still not returned to the abandoned movie set as at last weekend.

She claimed that she actually travelled to Lagos on Tuesday for a TV shoot for Tee A's 'Time Out With Tee A', which is a comedy TV show.

She also claimed that when the movie the news broke about her abandoning a movie set, she offered to make a refund of all the money collected from the movie producer but the producer begged her not to take that step.

According what we gathered, the movie stars the likes of Queen Nwokoye, Frank Arturs amongst others.

You will recall that last year, a movie producer, AMACO Investment had same problem with actress, Uche Ugbodo.

The latter was reported to actors' guild leadership and was faced with a two-year ban from acting.