IBORI AND THE FUTILITY OF PUBLIC-OFFICE THEFT 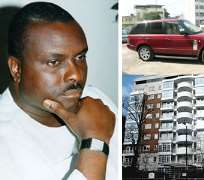 The 13-year prison sentence of a 54-year-old former governor is not the kind of story any conscientious journalist will be proud to write. But that is exactly the lot of James Onanefe Ibori; and to remind current and upcoming leaders of the crass vanity of public-office rapacity is the unenviable lot of this writer.

Born to the family of late Chief Ukavbe Iborigho and Mrs. Comfort Oji Ibori of Otefe in Oghara, Ethiope West Local Government Area of Delta State, James Ibori held out a lot of promise for the people of Delta, having been declared governor of the oil-rich state in 1999, after the country’s belated return to civil rule (occasioned by a ‘heavenly coup’), and having been a member of the ruling Peoples Democratic Party (PDP) that was sure to clinch the governorship seat for a second four years. But he fluffed a lifetime opportunity. As things stand, he will never, ever, have a second chance. Pity!

Had events followed a separate course, Ibori could have been hailed on a day like this as an emblem of determination who shoved defeat aside to snatch victory at a time someone else’s will could have failed him. In 1990 when his political career kicked off following his joining of the National Republican Convention (NRC), he was nominated to contest for the Ethiope Federal Constituency seat at the Federal House of Representatives seat. He lost to the candidate of the Social Democratic Party (SDP) candidate.

But a relentless Ibori remained in the political frame, joining the Grassroots Democratic Movement (GDM), which later merged with other parties to birth the PDP. Nine years after his initial loss, Ibori was governor of Delta State. Another 13 years on, and he is languishing behind bars. How did it all happen?

Ibori’s eight-year rule was diseased by extreme corruption and siphoning of government funds, which he perpetrated chiefly by using cronies and families who ran his phoney organisations by proxy. No sooner had his tenure ended in 2007 than the Economic and Financial Crimes Commission (EFCC) instituted corruption charges against him.

He was arrested on December 12, 2007 on charges of theft of public funds, abuse of office, and money laundering by erstwhile EFCC chairman, Nuhu Ribadu who additionally alleged that Ibori had attempted to bribe him with $15 million cash to drop the charges. Two years after on, on December 17, 2009, a Federal High Court sitting in Asaba, Delta State unbelievably discharged and acquitted him of all 170 charges of corruption brought by EFCC.

But whatever evanescent joy he derived from that acquittal had been, in fact, nullified two years earlier, when the Metropolitan Police raided the London offices of lawyer Bhadresh Gohil, where they found, hidden in a wall behind a fireplace, computer hard drives containing details of a myriad of off-shore companies run for Ibori by Gohil; fiduciary agent, Daniel Benedict McCann; and corporate financier, Lambertus De Boer. All three have since been slammed a combined jail term of 30 years.

Ibori’s final journey to gaol then began on May 13, 2010, when he was arrested in Dubai, United Arab Emirates by the Metropolitan Police. Sensing that he had reached his dead end, he pleaded guilty to 10 counts of money laundering and conspiracy to defraud, at Southwark Crown Court, London.

Ibori’s confiscated properties, which he amassed through his ill-gotten wealth, amount to several hundred billions of naira! Imagine if Ibori had allocated just N10b to construction of roads in Delta and another N20b to upping the standard of education in the state; imagine if he dedicated N30b to creation of jobs, and, say, N40b to improving the pay package of public service workers. He could have effortlessly channelled N50b into developing agricultural productivity among his people. Imagine if he did all that, he would still not have spent a fifth of all that he has now lost; yet Deltans would, by now, be worshipping him as though he were God.